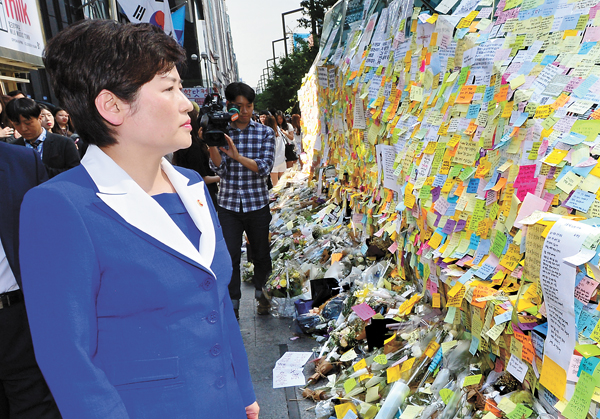 Kang Eun-hee, minister of the gender equality and family, reads Post-it notes Friday at a mourning wall for the 23-year-old woman who was stabbed to death by a stranger in a bathroom near the station on Tuesday. [NEWSIS]

Public outrage over the early morning murder of a 23-year-old woman in a bathroom near Gangnam Station, southern Seoul, has morphed into a movement against misogyny in Korea, despite the police’s reluctance to label the case as a hate crime against women.

The public displays of mourning that started at Exit 10 of Gangnam Station Wednesday spread all the way to the southern city of Busan. On Friday, people started to bring Post-its and flowers to mourn the death of the victim to a mourning site in Busanjin District, central Busan.

Kang Eun-hee, minister of the gender equality and family, paid a visit to the impromptu mourning site in Gangnam on Friday.

Outrage against misogyny and crimes against women was further ignited when Ilbe, a self-admitted xenophobic and sexist online community, sent a wreath to the Gangnam Station site Thursday with a statement that read, “Let’s remember that soldiers died in the sinking of the Cheonan warship because they were men.”

Anti-misogyny protests went viral online as celebrities and ordinary citizens uploaded posts on the issue. On a Facebook page called “Gangnam Station Exit 10,” an introductory post read, “This murder is a hate crime against women and this page is to combat misogyny.” The page has been liked by over 3,600 people.

A suspect surnamed Kim stabbed the victim multiple times at 1:00 a.m. on Tuesday after she came into a bathroom used by patrons of a karaoke bar. He told police he didn’t know the victim but killed her out of vengeance against women in general for looking down on him.

“Suspect Kim is truly vulgar,” wrote Hwang Chan-seong, a member of the Korean idol group 2PM via Twitter. “He was motivated to murder the victim because it was a she. It was a crime made by choice, not an impulse. I hope he feels deep in his bones the wrong he committed.”

The police, however, are hesitant to say misogyny was the root of the crime.

“Despite his testimony,” said a police officer, “we also have to consider the fact that he suffered from a severe form of schizophrenia for a long time. He showed unaggressive symptoms of the mental disorder when he was in middle school and was diagnosed with the disease in 2008 and has been receiving treatment since.

“The killing could have been due to a worsening of the suspect’s symptoms because he recently stopped taking his medication or due to paranoia,” added the officer.

From the outrage offline and on, it seems the public’s not buying the police line.

“Regardless of how much we women drink,” said Seo In-young, 30, who visited the mourning site in Gangnam, “they try not to fall asleep in a taxi because we are afraid something might happen, and even if old men call us drunken bitches in subway stations, we have no choice but to remain silent. Our daily lives are full of horrors and this case is horror turning into reality.”

“After the murder, some people blamed the victim for wandering around late at night and suggested she deserved what she got,” said a 24-year-old woman at the mourning site. “This is absurd. It’s typical of Korean men to blame a victim who happens to be a woman and instead take the culprit’s side simply because he’s diagnosed with a mental disease.”

Analysts said the discussion was a healthy one.

“Whether the suspect is diagnosed with mental illness or not,” said Shin Kwang-young, a professor of sociology at ChungAng University, “it’s true that misogynistic attitudes did appear when some people talked about the victim. Women lived in a flood of language and physical violence targeted at them and they are rightly protesting this murder case.”

Analysts also said the case shows the public the vulnerability of some groups, like women or minorities.

“It’s not only hate crimes against women that are happening more but also crimes against foreign immigrants and sexual minorities,” said Rho Myung-woo, professor at Sogang University’s Department of Sociology. “People should come to a common understanding that hate crimes are crimes against humanity and should be punished heavily.”

“Instead of blaming individuals, society has to become more inclusive toward the social minorities,” advised Jang Duk-jin, a sociology professor at Seoul National University.