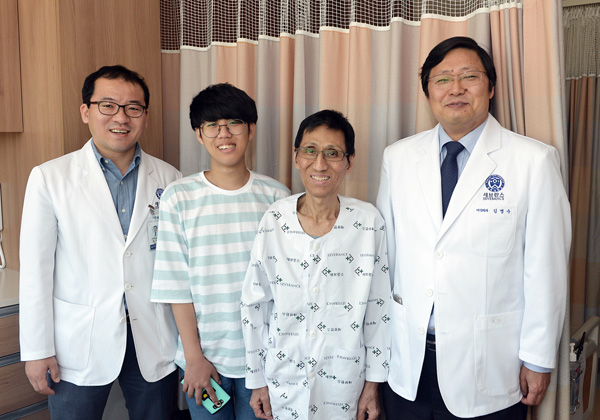 The hospital said through a press release Friday that a father and son went into surgery on April 28 and that the father, 57, was discharged Thursday. The son, 18, left the hospital on May 7, just nine days after the transplant.

The son, Kim Su-hyeok, had 70 percent of his liver removed to donate to his father, Kim Yeong-wu, who was suffering from severe cirrhosis of the liver, which doctors said could only be treated by a transplant.

Severance Hospital, headquartered in Seodaemun District, western Seoul, stressed that their transplant was the first of its kind in the country.

A robot was used during the younger Kim’s liver resection. It helped doctors “pull out the liver” from his body through a 10-centimer (4-inch) incision under his belly button, which was shorter than usually needed without robotic assistance, which is 20 centimeters.

Choi Gi-hong, one of the doctors who performed the surgery, said using a robot helped the younger Kim recover more quickly, shortening the period from 2 weeks to nine days. It reduced risks of complications and left him with a much smaller surgical scar, he added.

With the hospital’s success, Choi hopes that local surgeries that use robots will be covered by health insurance.

“Liver resections tend to psychologically burden the patient because they’re often left with a big scar, a long recovery period and complication risks,” said Kim Myong-soo, another doctor involved in the surgery.

Dr. Kim added: “With the help of robots, a lot of this pain will be minimized and more people will be open to organ donation.”