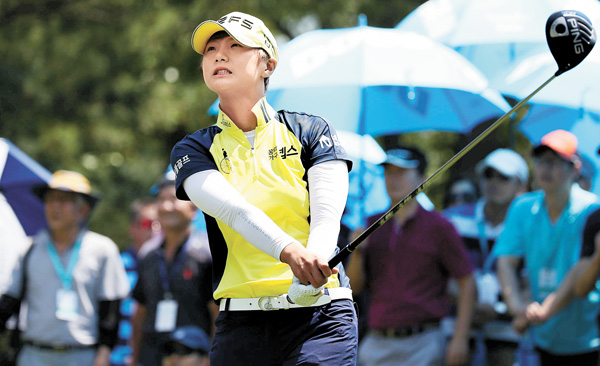 Park Sung-hyun poses for a photo with her trophy from the Doosan Match Play Championship on May 22. Park played against Kim Ji-hyun in the finals and came out with the win after a dramatic round that went into a sudden-death playoff. The victory is Park’s fourth this season. [NEWSIS]

Korean golfer Park Sung-hyun won the Doosan Match Play Championship, which took place from May 19-22 at Ladena Golf Club in Chuncheon after a dramatic playoff against Kim Ji-hyun.

During the only match play event in the Korean LPGA, the final round came down to a contest between Park’s power and Kim’s accuracy.

Match play is a scoring system in which a player earns a point for every hole in which he or she outpaces opponents, which is different from the more common stroke system that awards points based on the aggregate number of strokes in a given round.

In an interview before the final round, Park said the contest between her and Kim would be “bloody,” heralding the dramatic turns of events about to take place.

The golfers traded leads for the entire round. Park grabbed an early start when she parred the first hole and birdied the second with Kim following up by bogeying the first and parring the second. The two tied the third and fourth holes by parring both.

The momentum began to shift in the fifth when Park began to struggle. At the par-4 fifth, Park narrowly missed a birdie after the ball was deflected from the edge of the hole. Kim, meanwhile, showed off some outstanding shots, including a perfect second that landed only a few inches away from the hole. With Kim carding the first birdie of the day, Kim narrowed Park’s lead by one hole.

The match was all square by the seventh when Park collected a double bogey and Kim pocketed a par. The match remained even until the 10th hole. After barely missing an eagle shot with the ball just missing the hole during the second stroke, Park nailed her birdie putt to take the lead yet again.

But Kim didn’t want her fans to return home disappointed, making the match square once more at the 11th by grabbing a birdie. This was when her accuracy really began to pay dividends.

Although her tee shot didn’t travel as far as that of Park, Kim continued to land the ball in advantageous positions to streamline her approach shots, while Park’s lackluster shots continued to land in tough spots.

Kim took the lead at the 12th hole and was dormie after the 16th hole, with a two hole lead and only two holes remaining for the round. At this point, Kim needed just one tie to take home her first victory of this year.

But just as the odds seemed stacked against her, Park proved she is a relentless fighter in addition to a power hitter. In the 17th hole, Park’s tee shot landed on the right side of the fairway while Kim’s landed at the middle.

The second shot, however, was the game changer.

Park’s second approach crashed with the pole before landing just a few inches from the hole, almost making it an eagle. This was perhaps the turning point for the match as Park went on to tie the match by claiming the 17th and 18th holes.

Kim particularly struggled on the the 18th. Although Kim’s tee shot landed safely on the fairway, she ended up bunkering her third shot. After escaping the bunker, Kim still had a chance to clinch a win when everything came down to her par putting from afar. But after Kim missed the putt, the outcome of the finals had to be decided in the sudden-death playoff.

The end came swiftly. During the first round of playoff, which started at the 10th hole, Park maintained the momentum she’d picked up and claimed the win with a birdie.