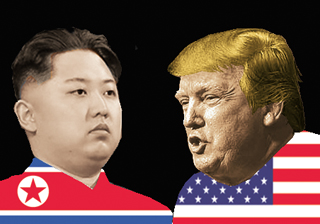 Fools rush in. Ignorance makes you say insensible things. U.S. Republican presidential candidate Donald Trump is such a case. If he becomes president, he says he will build a wall along the U.S.-Mexico border and ban all Muslims from entering the United States. Such racially and religiously discriminatory remarks are taboos for American politicians. But Trump doesn’t seem to care about political correctness and gets enthusiastic support from working-class white Americans who believe their jobs are being snatched up by immigrants and minorities. His candidacy started out as a joke, but now, he is the likely presidential nominee of the Republican Party and could defeat the Democratic Party’s Hillary Clinton to become the next president. Trump’s blunt remarks and targeting of angry and poor white Americans are changing the political dynamics of the United States.

His comments on foreign policy focus on changing the frame of America’s international engagement policy, including the Korea-U.S. alliance. He threatened that U.S. forces will withdraw unless America’s allies pay stationing costs completely. If Korea and Japan want, Trump said he would agree to nuclear armament. Utterly ignorant in foreign policy, Trump stirs up poor voters by claiming that Korea, Japan and China are making money off America’s sacrifices without understanding how the United States benefits from its global relationships.

His election cannot be ruled out, and so while Korea and other allies pretend to be nonchalant about the possibility of a Trump presidency, they feel nervous at heart.

As the likelihood of his win grows, he has begun to make fewer imprudent remarks and finally made a crucial proposal that may prove to be a critical turning point for the resolution of the North Korean issue, depending on how the situation progresses.

In an interview with the Reuters, Trump said on speaking to Kim Jong-un, “I would have no problem speaking to him. At the same time, I would put a lot of pressure on China because economically we have tremendous power over China … China can solve the problem with one meeting or one phone call.” His solution is simple and clear as he has always been. He is right that the North Korean issue depends on China.

China’s foreign ministry spokesman welcomed the talks between Washington and Pyongyang. Zhu Feng, a professor of international relations at Nanjing University and Korean Peninsula expert, called Trump’s proposal “amazing” and “quite attractive.” He told me in an e-mail, “Kim Jong-un must react positively as Pyongyang has been eager to show its longtime pursuit to win respect from the U.S. The summit meeting between the U.S. and DPRK would certainly is an ice-breaking push, and might signal a big switch of American policy of DPRK. I agree that such a summit meeting will be diplomatically desired, and politically encouraging.” Robert Carlin, a Korean Peninsula expert at Stanford University, also said in an e-mail, “[Trump’s comments] are kicking up a lot of dust and criticism in the U.S., not surprisingly demonstrating how little Americans understand about dealing with North Korea.” Considering their personalities and styles, Trump may be the best man to deal with Kim. It is interesting to imagine the confrontation between Trump, powered by ignorance, and Kim, who displays the power of the weak.

Hillary Clinton and Donald Trump will likely have a close race in the presidential election. Clinton is concerned about abstention by Bernie Sanders supporters. In a close run, that abstention could seriously hurt Clinton. The Democratic Party is worried about the escalating emotional discord between the Clinton and Sanders camps. So for now, Trump’s victory cannot be ruled out. In Central and South America and the Philippines, it has become a trend among working-class voters to vote for anti-establishment and rogue politicians. Poor voters say conventional politics favors the rich, and these demagogic politicians manipulate their anger.

While Koreans hope a man like Trump will not become the president of the United States, Korea’s primary ally, we need to have a Plan B in case he is elected. Seoul needs to meet with his foreign policy and security advisors as soon as possible to clarify if he would tolerate North Korea’s nuclear program when he said Korea and Japan could arm themselves with nuclear weapons, and whether or not he would meet with Kim Jong-un. We need to convince Trump of a Korean Peninsula policy that would not undermine the stability of the region. If Trump becomes president, he will have to adjust his foreign policy to be more realistic. Still, it is worrisome that his mind is set on America First.

At the same time, we also hope that if he becomes president, a U.S.-North Korea summit would change Washington’s North Korea policy from the strategic patience that allowed Pyongyang to upgrade nuclear and missiles program to one that utilizes engagement to make breakthroughs possible.