Cubans begin to rethink the impact of U.S. tourism

Cubans begin to rethink the impact of U.S. tourism 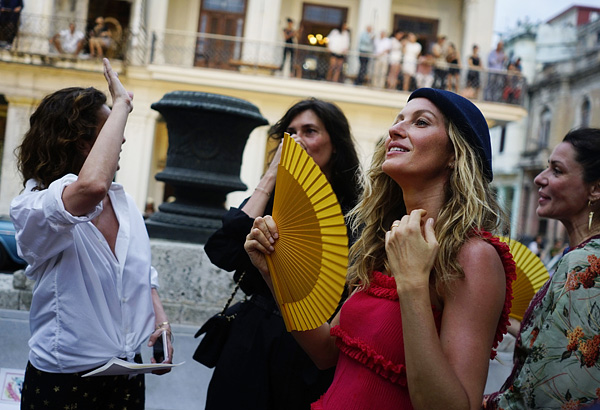 In this May 3, 2016 file photo, Brazilian top model Gisele Bundchen, second from right, attends the presentation of Fashion designer Karl Lagerfeld’s “cruise” line, for the fashion house Chanel, along Paseo del Prado in Havana. Artists, writers and intellectuals who believe deeply in Cuba’s opening to the world are questioning their government’s management of an onslaught of big-money pop culture. [AP/NEWSIS]

HAVANA - The triple tsunami of global capitalism that pounded socialist Cuba this month has spawned a fierce debate about the downside of detente with the United States. Artists, writers and intellectuals who believe deeply in Cuba’s opening to the world are questioning their government’s management of an onslaught of big-money pop culture.

On an island that prides itself on egalitarianism, sovereignty and its long record of outsized accomplishments in the arts, many are openly critiquing opaque deals with multinational corporations seeking picturesque backdrops for car chases and summer frocks.

“The essence of the thing is that we’re a country with a particular history that has a particular culture. We have to be conscious of those values and keep them in mind when it’s time to negotiate,” said Graziella Pogolotti, an 84-year-old cultural critic who wrote a long editorial in state media calling for deeper thinking about Cuba’s dealing with international entertainment brands.

Cubans began complaining soon after the eighth installment of the hugely profitable action movie franchise “Fast and Furious” began filming in Havana. On street corners and in living rooms, working men and women questioned how they would benefit from a production that was causing seemingly endless traffic jams, a new phenomenon in a city where relatively few people own cars.

Then came the arrival of the Adonia, the first U.S. cruise ship in Cuba in nearly 40 years. Around the world, television viewers watched prosperous-looking Americans greeted by trays of rum drinks and Afro-Cuban dancers in skimpy Cuban flag-patterned bathing suits. For many Cubans, it was a spectacle uniting the worst exotic stereotypes about their country with disrespect for a symbol of independence.

Within 24 hours, the world’s rich and famous were lounging on park benches on the majestic, colonial Prado boulevard as slender models showed off outfits by the French luxury label Chanel that seemed inspired by pre-revolutionary Cuba. The mostly foreign audience arrived in specially hired classic American cars. Havana residents had to watch from behind police lines more than a block away.

A year and a half after the United States and Cuba declared detente, and a month after President Barack Obama visited Havana, it seemed as if the world of global commerce and entertainment had finally landed on Cuba with full force.

Many Cubans were exuberant. Avid consumers of U.S. culture in pirated TV and films, they welcomed the sight of movie stars walking the streets of a country that often feels cut off from the outside world. Many said they were hopeful that the millions spent on the productions would improve life for locals.

But people’s personal offense at being held far from the events began translating into skepticism about whether their country’s hot new status would help improve their lives.

“I love that the world is looking at us, that the world is fixing its eyes on Cuba, but up until now I don’t see that it’s really bringing real, concrete benefits,” said Alberto O’Reilly, a 22-year-old librarian who was kicked off a street corner by police as he tried to watch the Chanel show.

For some Cubans, the flashy spectacles recalled the pre-revolutionary days when wealthy Americans viewed Cuba as a sexy tropical playground, ignoring the problems of the people who lived on the island. Fidel Castro famously shut down the country’s casinos and most sordid nightclubs when he came to power.

“It’s very important that we don’t give the ‘Ugly American’ a reason to come back,” said Desiderio Navarro, a widely respected critic and editor. “We’re not in the 1930s or ‘40s and we mustn’t repeat the errors of the past.”

The public backlash began the day after Chanel’s show, with a remarkable blog post by Sergio Gomez, the international editor of Granma, the Cuban Communist Party’s official newspaper.

Gomez, 28, took to the blogging website Medium with a lacerating post that called on Cuba’s leaders to better explain their dealings with the likes of Chanel and NBCUniversal, the entertainment giant that shot “Fast and Furious” in Havana.

“It would be hard to overturn a revolution, much less Cuba’s revolution, by filming a Hollywood blockbuster, helicopter included, or by closing the Prado boulevard to show off the cruise collection of a famous French brand,” he wrote. “But the way in which these events are interpreted, in the context of a process of change that will define the destiny of 11 million people, can subvert the social consensus that the country has maintained for more than half a century.”

Cuba’s official Union of Writers and Artists also complained that the cruise ship reception offered “a deplorable sight to those visiting our country for the first time.”

Still, Cuba doesn’t appear to be running out of chances to get it right.

Michael Bay, director of the “Transformers” movie series said on his blog this week that work on the fifth installment was about to begin, writing, “Transformers starts production this week in Cuba.”