Insurance team aimed at expats is a major hit

Insurance team aimed at expats is a major hit 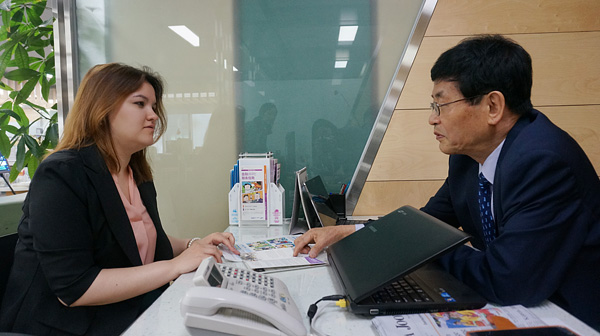 In his daily routine, Chun spends most of his time covering Seoul and nearby Gyeonggi. But Chun, who is in his late sixties, also frequently travels up to 300 kilometers (186 miles) to visit clients in remote regions like Mokpo, South Jeolla, and Hamyang, South Gyeongsang. He helps clients who need insurance coverage due to health issues and mechanical eventualities for their cars.

Chun’s services are in high demand, especially in rural areas because there are so few consultants like him who can speak English. In the six years since he started his job at the insurance company he has acquired over 400 expat customers, which includes diplomats, lawyers and English teachers.

“When I joined Samsung Fire and Marine in 2010,” Chun said in an interview with Korea JoongAng Daily on May 17, “I was one of very few first-generation consultants who specialized in dealing with expats. Back then, expats’ demand on private insurance companies was less. Companies’ services were so immature, they didn’t know how to deal with foreign customers and many clients often experienced difficulty in signing up and communicating with the company.” 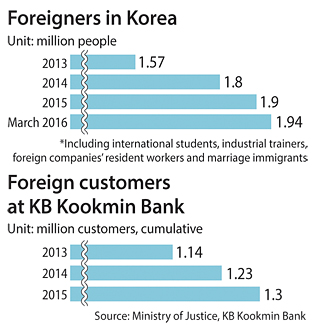 Samsung launched its exclusive team for foreigners in 2012 and now has 19 consultants, including Chun, who can speak English, Chinese and Japanese. The insurer also has nearly 60,000 expat clients, up 26.5 percent compared to 47,000 in 2014. Nearly 80 percent are subscribing to auto insurance while some of its more high-paid clients subscribe to private health and property indemnity insurances that also include wealth management services.

“I get an average of 10 new clients every month and I communicate with them via my Facebook page,” Chun said. “The significance of the expat population in Korea has changed a lot over the past few years. I feel that expats’ demand on local financial services has grown a lot and will keep growing in the future.”

According to the Ministry of Justice in March, nearly 1.94 million foreigners are in Korea to study, train in industrial skills, work at local operations of foreign companies or to accompany their spouse. That number that is up 40,000 within just three months as more foreigners have moved in to study, work or live in Korea in the wake of the popularity of Korean popular culture and the growing influence of local corporations. The ministry expects that the foreign population in Korea will break the 2 million mark within the year.

Samsung Fire and Marine Insurance is not the only local financial company that is expanding expat services. Local banks are trying to draw in expat customers to boost money wiring transactions and wealth management services. For example, KB Kookmin Bank launched an expat financial consulting service center last Monday at the Seoul Global Center, in central Seoul. The move comes as the bank’s foreign customer base rose from 1.1 million back in 2013 to 1.3 million last year, partly as a result of special operations in areas with heavy foreign populations such as Wongok-dong of Ansan and Uijeongbu in Gyeonggi.

“KB entered the Seoul Global Center to cater to the growing demand on financial services as the number of working foreigners here keeps growing,” said Choi Mi-kyung, head of the foreign customer department at KB Kookmin Bank. “We’ll reflect the voices and needs heard here to our actual financial products.”

Shinhan Bank opened an international finance center in January at its branch at the Seoul Finance Center in Gwanghwamun, central Seoul, offering financial consulting not only to foreign corporate clients but also individual customers. Consultation for retail customers is focused on wealth management by local private bankers, mostly to introduce them to financial and real estate investments in Seoul as well as local tax policies. KEB Hana Bank last month held a temple stay event for some 30 foreign resident customers, and held a real estate management consultation session for Chinese expats residing on Jeju Island.