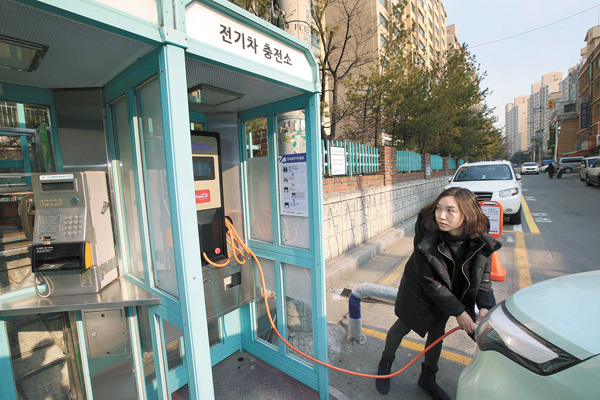 Monthly sales of homebred eco-friendly cars-hybrid and electric vehicles (EV)-reached over 6,000 units in April, far surpassing the previous record of 3,900, according to data from the Korea Automobile Manufacturers Association. As for import cars, sales of hybrid cars last month hit 1,394 units, a 105.9 percent jump from last year, according to Korea Automobile Importers & Distributors Association.

Among global players, Prius, made by the Japanese automaker Toyota, and ES300h, made by Lexus, also sold well. The fourth generation Prius, released in April, sold 358 units in just one month, a record monthly sale for Prius in the Korean market.

More cars are to come in the eco-friendly car market, as Hyundai Motor opened up pre-orders and will be delivering Ioniq Electric, the second line-up after Ioniq Hybrid, to the market by June, and GM Korea is also about to launch its new generation electric car, Chevrolet Volt, in latter half of this year.

However, for these electric battery-powered cars to properly run on Korean roads, it takes a well-established infrastructure to charge their batteries. Electric cars need to be charged at a charge station for about four to six hours by a Level 2 charger, a more prevalent charger with 240 volts, and 20 to 30 minutes by a Level 3 charger, which draws a higher voltage of 480 volts. Level 2 chargers are more likely to be used at home as home chargers so drivers can charge up while they are at home.

All-electric cars like Kia Motors’ Soul EV can travel 148 kilometers (88.86 miles) per full charge, while BMW’s i3 and Nissan’s LEAF can travel 132 kilometers on a single charge. Hyundai Motor’s Ioniq Electric, the latest release, can cover 180 kilometers per charge, according to company data. Considering the distance a car can move per charge, varied situations could call for charging stations nearby to power up the cars.

However, the government has progressed little with improving the actual environment to accomplish its goal.

There are now a total of 337 public EV charge stations in Korea. Japan, meanwhile, has over 34,000 charging stations ready for EV drivers. Adding to the shortfall in the actual number of charge stations, the government decided to charge the electricity used in charge stations at a rate of 313.1 won per kilowatt-hour from April 11. Assuming the average driver move about 13,378 kilometers a year, EV drivers will have to pay 58,000 to charge their cars. The pay burden is half that of gasoline fuel prices, but as EVs are still in the early stages of development and charge stations are so few in number, drivers are not strongly incentivized to purchase them.

“The government had proposed goals to ramp up EV sales in Korea,” said Kim Pil-soo, professor of automotive engineering at Daelim University, “but considering the infrastructure and support systems currently established in Korea, it greatly lags behind those set up in Japan and China.”

Other government aid to boost EV sales in Japan include subsidies of up to 850,000 yen ($7,713) for EV purchases and 50-percent discounts on highway tolls for fees up to 2,000 yen as well as 100-percent discounts for fees less than 2,000 yen. Meanwhile, the Korean government does provide subsidies of more than 12 million won, but industry insiders say more practical support must be established in addition to providing subsidies.

“The government has to expand the number of charge stations and implement more appealing incentives such as exempting toll fees for EV drivers, as in Japan,” Kim added.