A view of a dockyard in Tongyoeng in 2012, left, and Tongyeong Central Market in 2016, right. The city’s economy slowed down after the shipbuilding industry began collapsing, but the town has managed to transform itself into a tourist destination. [SONG BONG-GEUN, JOONGANG PHOTO]

TONGYEONG, South Gyeongsang - “We have very nice and fresh items today. Come take a look, I will give you a special discount.”

Such is the pitch from the owner of a fish shop in Tongyeong Central Market on a recent Monday afternoon. The market was full of visitors when the JoongAng Ilbo visited.

“There are a huge number of tour buses lined up as far as 1 kilometer from the market on weekends,” Chung Mi-ok, a parking attendant in her 50s, said.

More than 2.2 million people visited the market last year, in fact. It has become a major tourist attraction in Tongyeong.

That’s a future that Tongyeong has carved out for itself. Tongyeong’s past was all about fishing. In 2006, there were nearly 16,000 people working for shipbuilding companies in Tongyeong. As the industry contracted, those jobs disappeared. The number fell to 8,200 in 2012.

In 2012, the U.S. Food and Drug Administration banned imports of Korean shellfish because of possible contamination with human waste and norovirus. Tongyeong’s famous oyster market started to struggle. The region was literally going under.

Tongyeong successfully transformed its 570 islands into a hot tourism destination. Currently, nearly 6.6 million people visit the city a year. If you ride up the mountain by cable car, you can view the famous Hallyeo waterway in one glance. Tongyeong even created a park commemorating Admiral Yi Sun-shin, the national hero. 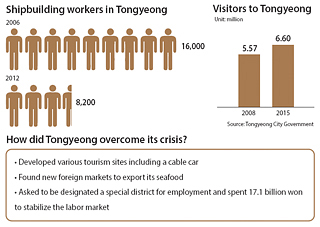 The cable car was built in March 2008 and more than 10 million people have ridden it. As more tourists come to Tongyeong, lodging facilities and shopping malls were built. This helped the local construction industry boom.

Tongyeong even has a plan to offer snowless luge rides throughout the year. In 2012, the city signed a deal with a New Zealand company to build a track, and construction is expected to be finished this year.

The city continues to help the local fishing industry. It is trying to purify its shore and is offering various educational programs to fishermen.

City officials also went to Washington, D.C., to prove the quality of local seafood to the U.S. Department of Agriculture. The ban on Korean imports was lifted in 2013. Tongyeong’s oyster exports worldwide rose from 4,800 tons in 2013 to 7,500 tons last year. The city is also trying to expand the volume for exports of anchovies, sea squirts and eels.

Chung Geun-soo, 44, opened a dried fish shop at the central market after losing his job at a shipbuilding company. “I only earn 80 percent of what I earned at my previous company, but I am happy that I can do my own business,” he said. “I know a guy who became very successful by raising oysters after he quit his job as a welder.”

City officials point out that the government’s decision to designate Tongyeong as a special district for employment helped the local economy. The central government spent some 17.1 billion won ($14.4 million) starting in 2013 to help local people get jobs and support small business owners.

“We didn’t just give out money, but we encouraged people to become economically active by providing educational programs,” said Koh Jong-sung, a director at the Tongyeong City Government.

Tongyeong’s trajectory is similar to other cities that were once famous for shipbuilding. Nagasaki was once the biggest shipbuilding city in the world, but its industry started to shrink in the early 2000s.

The city revitalized its local economy by advertising itself as a cruise ship destination.