Forum paves the way for a sustainable future

Forum paves the way for a sustainable future 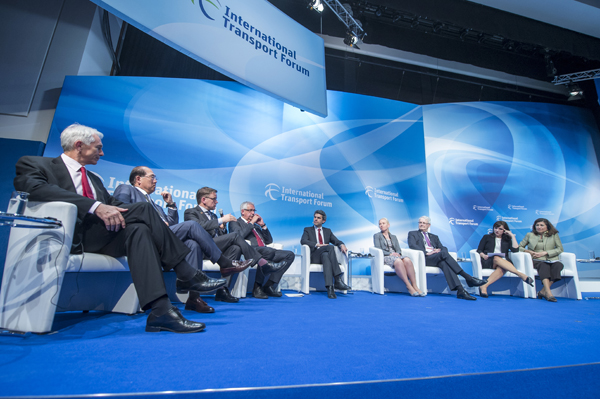 About 1,100 attendees including politicians, government officials and transport-related industry figures from 71 countries participated in the 10-year-old forum, which was hosted by the Organization for Economic Cooperation and Development (OECD) in Leipzig, Germany from May 18 through May 20. The three-day event, the largest transport-related forum in the world, boasts 57 member countries all of which are committed to improving transport efficiency and economics.

Korea’s vice transport minister, Choi Jeong-ho, attended the event. Korea is one of 13 non-European members of the ITF. Lim Kitack, secretary-general of the UN International Maritime Organization, also participated on behalf of the global shipping community to talk about the organization’s efforts to help cut greenhouse gas emissions from ships.

The theme of this year’s forum was “Green and Inclusive Transport.” The commitments made at the UN Framework Convention on Climate Change (UNFCCC) 21st Conference of Parties (COP21) in Paris in December served as a catalyst increasing the transport community’s rate of development towards greener transport.

“Decision-makers have an important task to find ways to benefit from transport without putting undue strain on the environment,” said Hans Christian Schmidt, Denmark’s minister for transport and building and the president of the ITF. “In other words, we must find a way to decarbonize the transport sector in order to help reduce its environmental impact.” To that end, the ITF is conducting numerous research projects to find better ways of decarbonizing the industry, the president said. In fact, the ITF Decarbonizing Transport project officially kicked off on Thursday. 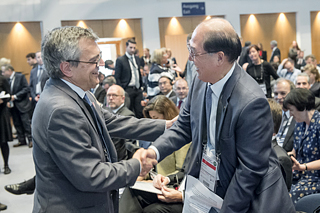 According to ITF research, transport activities currently contribute 23 percent of global CO2 emissions from fossil fuels, with that share expected to rise.

The Decarbonizing Transport project aims to provide a common assessment tool based on a comprehensive modeling framework and supported by dialogue with key stakeholders that will enable the ITF and its partners to evaluate the impact of different carbon reduction measures. It also aims to enable countries and other stakeholders to translate such blueprints into action, delivering results grounded in quantitative data, and support those actions to achieve the UN Sustainable Development Goals, along with the decarbonization of the transport sector.

“Our challenge is to reduce transport CO2 without sacrificing the access and opportunities offered by transport,” said José Viegas, secretary-general of the ITF. “Technology is an important part of the answer.”

Under the theme of green transport, the participants, including the founders of famous start-ups like Zipcar and Tesla, discussed innovation and the future of transport. They agreed that the landscape of the future transport industry will be based on electric and autonomous vehicles in a sharing system.

“The future of cars will be shared,” said Robin Chase, founder of Zipcar, the largest car sharing company in the world. “The future is urban, and we do not have space for single-occupancy cars in cities anymore, and we have the technology, both in smartphones and autonomous vehicles, to make sharing transportation straightforward and simple.”

“The taxi-hailing apps have shown us that ... if we can get more than one party in a taxi in this sharing system, it will be even more desirable,” she added.

Autonomous vehicles allow citizens to move from point to point at the price of shared subway tickets, provided they can get enough people in those cars, according to Chase.

“We need to re-think how we use street space and put single-occupancy vehicles in a secondary position,” she added.

Traditional carmakers will also make aggressive efforts to include IT in existing vehicles in order to catch up with the trend, said Claire Martin, vice president of corporate social responsibility at Renault, a French automobile manufacturer.

“My conclusion is that the future of transport will be about electric vehicles, economy and sharing,” Martin said. “Countries will have infrastructure for EVs and autonomous vehicles, and those new vehicles will help save time and reduce costs in terms of economics.”

A game-changer in the global industry, California-based Tesla Motors, agrees on the economics of the future transportation.

“Our goal is to drive down costs. Some say we are a luxury, high-end brand, but it’s not what we want to do,” JB Straubel, chief technology officer of Tesla Motors said. “What we are trying to do with the Model 3 is to show that we can drop down the prices of electric vehicles.

“Cost is the biggest challenge and the focus of innovation is to cut it. We are seeking [to make a] reasonable and affordable vehicle with the Model3,” he said.

Straubel said although the car sharing market will continue to grow, people will still want to possess their own vehicles.

Germany, the largest car producer in the world, unveiled a plan to spend 1.2 billion euros ($1.34 billion) on installing charging stations for EVs every 30 kilometers (18.6 miles) on roads with a goal of having 400 quick-charging stations on highways and a total of 15,000 on all roads by 2020, according to Alexander Dobrindt, Germany’s federal minister of transport and digital infrastructure.