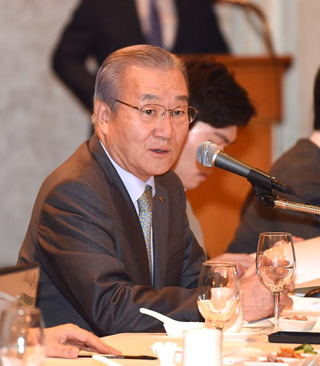 The Korea International Trade Association (KITA) hopes to construct a new venue to hold conventions in an effort to strengthen the MICE (Meeting, Incentives, Convention, Events and Exhibition) industry.

The association currently operates COEX, a center for global convention centers and exhibition halls located in Samseong-dong, southern Seoul, but said in a press briefing on Friday that the venue lacks the capacity to handle increasing global demand in the MICE industry. In fact, the national trade volume rose from $332.8 billion in 2000 to $963.3 billion in 2015.

“Korea is currently ninth in terms of trade volume and 18th in exhibition space,” said KITA Chairman Kim In-ho. “But our infrastructure for the MICE industry hasn’t been keeping pace with that growth over the years. Seeing what impact a convention could bring in, like the recent Consumer Electronics Show, we felt the need to expand our convention infrastructure and the timing of this matched with the government’s plan for Jamsil.”

The Seoul City Government had confirmed its plans in April to develop a specialized zone in order to boost international trade in the area encompassing COEX and the Jamsil Sports Complex. Part of its plan involves the construction of a massive convention and exhibition center that will encompass over 100,000 square meters (328,084 square feet) of land. KITA hopes to win the bid to be the main operator of the construction project and integrate this with COEX and City Airport, Logis & Travel, Korea (CALT). The main operator of the business will be selected by 2018 and construction will take place from 2019 to 2025, according to the proposed plan.

The competition is fierce, however, so in order to win the bid the association has decided to focus on securing financial backing, as it needs to cover at least 15 percent of the construction cost with its own equity. The association will use COEX and CALT businesses in order to accomplish this.

“The world is undergoing restructuring and the association needs to effectively respond to the changing environment,” Kim said. “We aim to make our affiliated companies focus exclusively on what they are meant to do, which means COEX will focus on conventions and exhibitions while CALT will focus on logistics rather than other businesses such as space leasing and management.”

Following the announcement, COEX Mall will begin to seek business operators who can take care of the retail shops currently doing business in the COEX building, while both COEX and CALT’s space-leasing business will be handed to another specialized company. The association said existing employees who were taking care of such business divisions will be assigned to other jobs and will not be laid off. The internal restructuring is scheduled to be completed by this year.