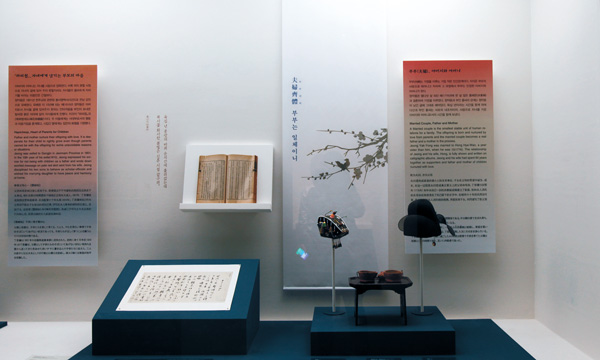 Dasan Jeong Yak-yong’s “Hapicheop,” a calligraphy album he wrote to his sons while in exile in 1810, is on display for the public for the first time at the National Folk Museum of Korea. [NATIONAL FOLK MUSEUM OF KOREA]

During his lifetime, he wrote hundreds of highly influential books on philosophy, science and theories of government and was the first Korean who advocated democracy and politics for the people. Before being forced into exile in 1801 for accusations of being a Roman Catholic, which was illegal in Joseon, the man also enjoyed great support from King Jeongjo, who died a year before Jeong’s banishment.

There are mountains of articles and references on what a great man Jeong was, but relatively few on what kind of father he was to his two sons and daughter.

This year marks the 180th year since Jeong’s death, and the National Folk Museum of Korea in central Seoul has been paying a special tribute with a unique exhibition shedding light on Jeong’s fatherly side.

After witnessing a large number of parents visiting with their children, the museum said it would launch an educational program for children connected to the exhibition on Sundays until the exhibition ends on June 13.

“Twice a day on Sundays, we’ll hold educational classes for children where they can think about the filial piety and brotherly love that Dasan Jeong Yak-yong stressed in the ‘Hapicheop’,” said an official from the museum. “There will also be various programs available such as making your own family ‘Hapicheop’ together with parents.” The programs need to be booked via museum’s homepage for kids (www.kidsnfm.go.kr).

The “Hapicheop” is a calligraphic album in which Jeong wrote for his sons while he was in exile in 1810. The album contains life lessons and series of educational phrases on how to live decently and help others.

The messages were written on pieces of fabric from Jeong’s wife’s skirt, which was red as the evening sky. (“Ha” refers to sunset and “pi” refers to a skirt. “Cheop” refers to an album or a scrapbook.)

During Jeong’s 18-year exile in Gangjin County, South Jeolla, his wife, to express longing for her husband, sent him the red skirt she wore on their wedding day.

According to the museum, it took decades for the “Hapicheop” to be ready to be exhibited to the public, because “it, too, had a tough life like Jeong.”

Jeong’s descendants handed down the album, generation after generation; however, all four sets went missing during the Korean War (1950-53). It was found 50 years later in 2004 on an old woman’s scrap paper handcart in Suwon, Gyeonggi. Then a man brought the artifact on the KBS show “Jinpoom Myungpoom,” on which people bring in their rare items for appraisal, in 2006, insisting that he had received it from the old woman.