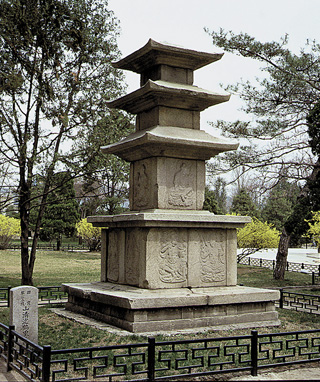 Originally a ruined pile of stones located at the site of an old temple named Beomheosa in Sancheong, South Gyeongsang, this stone pagoda was purchased by a Japanese antique dealer in 1941 and rebuilt at a factory yard in Daegu.

The pagoda was moved to Gyeongbok Palace in Seoul in 1947 and then to the National Museum of Korea where it stands today.

Each tier of the base has four corner columns, two (lower tier) and one (upper tier) central columns, all carved in relief.

There are the Eight Guardian Deities, two on each of the four sides, carved in relief and, on the first-story body, four bodhisattvas, one on each side.

Each of the three roofstones features four-tier cornice, thin and gentle slopes, and delightfully upturned corners.

The pagoda is also dubbed “decorative pagoda” largely because the elaborate carvings of the Eight Guardian Deities of Buddhist law around the upper tier of the base and the first-story body.