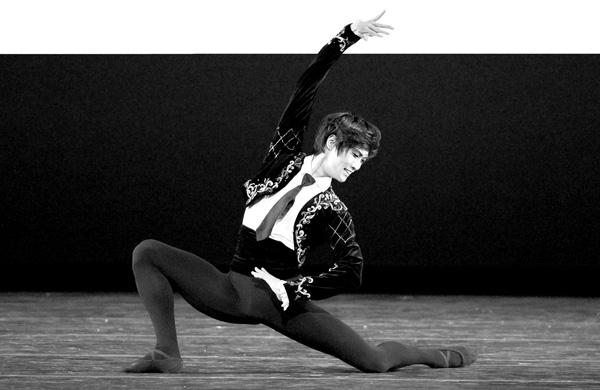 Kim Ki-min of the Mariinsky Ballet said he had never considered even the possibility of winning the Benois de la Danse, one of the world’s top dance awards.

That changed on Tuesday, when the 24-year-old ballet dancer received the honor in Moscow. He won the prize, which has been considered a gateway to global renown, for his solo in La Bayadere at the Paris Opera Ballet.

Kim became widely known in Korea after becoming the youngest ballet dancer to play the main male role of Prince Siegfried in the Korea National Ballet’s “Swan Lake” in December 2009. He was then chosen in 2011 to perform for Russia’s Mariinsky Ballet, one of the world’s top ballet companies. It was the first time the company had recruited an Asian male dancer. Just two months after he joined, he played the lead in “Don Quixote,” and then became a principal dancer for the company in April last year.

Kim’s father wanted him to give up ballet because his older brother, Ki-wan, was already training and appeared to be more naturally talented. When the family had to move to Seoul from Chuncheon, the father lied to Ki-min, telling him there were no private academies in Seoul. (His brother was enrolled in a professional program.) But Ki-min, who was in elementary school, was unfazed and continued to make the two-hour commute to his old academy in Chuncheon. After about a year, his father gave up and took him to an academy.

Kim’s older brother is currently performing with the Korea National Ballet, and the two brothers have long been inspiring each other to go beyond their limits. Kim has said he practiced until he was “close to death” because he wanted to become more like his older brother. He also added that the inferiority he felt compared to his brother has made him who he is now.

For his part, Ki-wan has said how proud he is of his little brother for winning such a big honor.

Since Ki-min is not scheduled to perform in Korea anytime soon, the JoongAng Ilbo talked with the award-winning ballet dancer over the phone last week after he came back to Saint Petersburg from Moscow.

Q. How do you feel about winning the award?

A. It feels [surreal]. I didn’t expect to win at all so I didn’t even prepare any comment to say after getting the honor. I just murmured [on stage] and got down.

It’s been five years since you went to Russia. What is it like to be there?

Schedules of practices and performances are extremely tight. It is definitely tough, but I feel happier than anything else. I have dreamt about living a life solely dedicated to the stage performance that will make me get on a plane, perform and leave again since young. But one thing I miss here is tteokbokki [rice cakes in red chili sauce] and Korean ramen.

What was it like to commute to Chuncheon to learn ballet when you were young?

Back then I had to pay 2,400 won ($2) for train tickets and other transportation fees. When I had 3,000 won with me, I had to skip meals, but when I had 5,000 won, I could afford to buy a sausage and coke. Even now, whenever I get on a train to give a performance, I think about that sausage.

What does it mean to you to have won this award?

I don’t think it’s anything special. I don’t believe that just winning this award means you’re talented. I’m still young and I have a long way to go. I just train myself hard everyday.