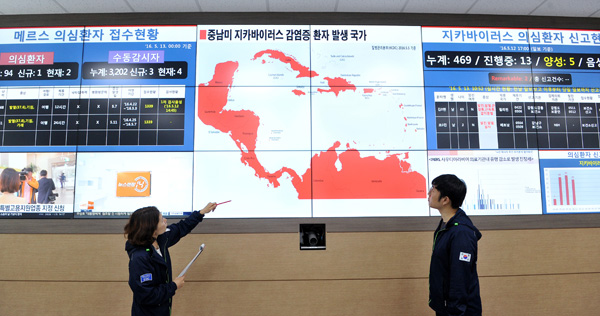 It’s been 351 days since Mr. Lee was diagnosed with Middle East respiratory syndrome (MERS). Never could he forget June 8, 2015, when he became part of a national outbreak, documented in government papers as MERS patient No. 74, the 74th to be infected in Korea.

Since then, much has changed. He and the rest of his family - his wife, daughter and son-in-law - to whom he later passed on the disease, all fully recovered. His grandson, born last year to his infected daughter, couldn’t be any healthier.

But not all is perfect, he sadly confides. Now stuck with a 15-kilogram (34-pound) oxygen tank, the 72-year-old still lies in a hospital bed, staring outside his window waiting for his life to return to normal.

“I can’t speak for long,” Lee says under heavy breaths. “I can’t even remember how the first month here went by. I was unconscious during the treatment. When I woke up and saw my kids, I asked them how I ended up in a hospital and whether I’d been in a car accident.”

Lee, who declined to provide his full name for this story, spent the past year at Samsung Medical Center in Gangnam District, southern Seoul. Having recovered from MERS, he’s now battling the aftereffects - cardiac heart failure and fibrosis, or scarring of the lungs - which he says are just as agonizing as MERS.

For Lee, who now weighs 10 kilograms less than before, even going to the restroom has become a tedious task.

“I got so overwhelmed this morning that I hurled the oxygen tank away,” says Lee, adding, “Everyone else seems to be over with MERS. But for me, I just see no end to this pain.”

One year ago this month, the first MERS patient in Korea was announced, sending the entire nation into a panic.

A 68-year-old man had returned from a business trip to the Middle East, began to feel ill and then visited three different medical facilities and the emergency ward of a major hospital in Seoul before finally being diagnosed with MERS, the first Korean to ever receive that diagnosis.

The virus spread with blinding speed, ultimately killing 38 people, making 186 sick and leading to the quarantine or house arrest of 16,700 more. More than 80 hospitals visited by MERS patients were shut down and over 2,000 schools were temporarily closed.

It was the largest outbreak outside the Middle East, where MERS originated. The tourism industry suffered a colossal loss, especially of Chinese visitors. In fact, MERS did more damage to the domestic economy than the sinking of the Sewol ferry in April 2014.

It rapidly became clear that Korea had a critical lack of epidemiologists and that its emergency room doctors and technicians had followed sloppy procedures that helped the disease spread.

More than 80 infections were tracked back to Samsung Medical Center, most of which were connected to Patient No. 14, who spread the virus over three days in the center’s emergency ward. Korea’s specific hospital culture, in which family members intimately nurse their sick relatives, was largely blamed, as were crowded emergency rooms, where relatives and friends often share the same space as patients.

Korea’s Health and Welfare Ministry declared an official end to the MERS outbreak on Dec. 23, putting national anxieties to rest.

Looking back at the past year since the MERS outbreak, the JoongAng Ilbo set out to examine just how much Korea’s medical personnel have learned from the harrowing experience and how they’re putting those lessons into action.

So far, not much seems to have improved.

At a recent visit to the Centers for Disease Control and Prevention (CDC)’s Emergency Operations Center (EOC) in Cheongju, North Chungbuk, a 24-hour central command for emergency responses, which was launched last January, workers primarily complained of a lack of human resources.

Eleven workers - three full-time public servants and eight part-time researchers - work in teams of two, rotating in three shifts covering 20 to 30 calls each day, compiling the latest updates on MERS and the newly-emerging Zika virus, as well as looking into relevant cases from abroad.

In case a new MERS or Zika patient appears, the center is also in charge of releasing information to the local media, such as the person’s pre-diagnosis travel route and the name of the hospital or medical clinic.

Aside from a dearth of manpower, the EOC also finds it difficult to communicate with public health centers, which they’re obligated to contact after identifying a suspected MERS or Zika patient, due to their different working hours. While the EOC works round the clock, public health centers usually run from 9 a.m. to 6 p.m.

When Korea’s second Zika patient was reported one Saturday last month by a local hospital in Nowon District, northern Seoul, the neighborhood’s public health center picked up the message the following Monday morning. When another hospital in Jongno District, central Seoul, called the EOC last month in the wee hours of a Wednesday to report a suspected case of MERS by a woman who arrived from the United Arab Emirates, it took over two hours for a worker from the public health center to arrive at the hospital.

“This country needs a system,” says Kim Yun, a professor at Seoul National University College of Medicine, “where epidemiologists can be mobilized for emergency calls. It’s about time we make bold investments in human resources like the United States.”

On another front, the Ministry of Health and Welfare announced earlier this year that three to five public and national hospitals will be designated as hospitals specializing in infectious disease treatments, working with the Ministry of Strategy and Finance to determine exactly how many hospitals will be designated as such, but it appears that those decisions have yet to be made. Sources from the ministry said discussions are ongoing.

Another unsolved issue is the government’s order that hospitals with more than 300 hospital beds must create at least one negative-pressure isolation ward, which will block cross-contaminations from room to room. Authorities expect the number of such facilities to rise from 100 to 1,500 by 2020.

But, pointing out that these rooms will likely operate at 30 percent capacity and that local hospitals will have to empty two six-person wards and spend 200 million to 300 million won ($168,132 to $251,943) each in order to build them, doctors here doubt that hospitals will volunteer to maintain such facilities in the long run.

“The government did promise to finance part of the installation,” says Choi Jae-uk, a professor at Korea University College of Medicine, “but it’s not enough to maintain them. It’s important that public hospitals set an example first, not private institutes.”

While many still doubt Korea would more capably respond to another viral attack like MERS, some doctors, like Lee Wang-jun, CEO and chairman of Myongji Hospital in Goyang, Gyeonggi, say there’s a silver lining.

In an effort to encourage local hospitals to develop their infection control, the central government promised to offer health insurance fees of 1,950 won to 2,870 won for each person every day during his or her treatment, starting from July.

In this case, the benefitting medical institution would have to adopt relevant infrastructure and professional manpower regulations, operate a committee tasked with overlooking infection control, educate their doctors and nurses and write a manual for relevant procedures.

Though the requirements may appear drastic, the insurance fees will be a significant increase from the current 10,000 won per patient per month.

“It’s a positive move,” says Lee. “We’ve never had this much insurance coverage. It’ll be a chance for hospitals to sharpen their games when it comes to infectious disease prevention.”