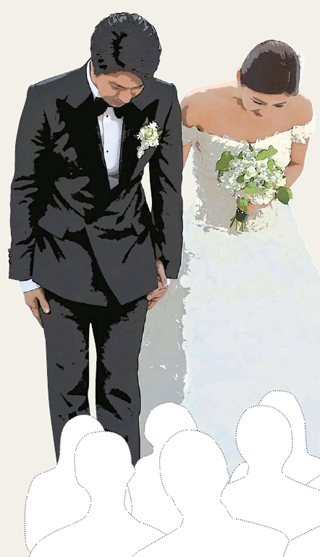 Many outside Korea can probably imagine the stiff-necked awkwardness that would no doubt accompany meeting a total stranger at one’s own wedding, but here, the obsession with image is causing many soon-to-be married couples to actually seek out strangers through online websites in order to fill up seats at the ceremony.

“My wedding is coming up soon, but I can’t sleep because I’m worried that not a lot of my friends will attend the ceremony,” read a recent post published on the website “Lemon Terrace,” where users share information about weddings and child-rearing. It continued, “I’m looking for people who can come to the wedding as my friends. Please contact me.”

Intrigued, I decided to reply.

I did not have to wait long for a response.

“I was worried that not a lot of people would reply because the wedding is so soon,” the 33-year-old wrote back. “Thank you very much for your help.”

The wedding was planned to be held in Seongnam, Gyeonggi, two weeks after the post had been uploaded.

“I don’t have a lot of friends,” she confessed. “The ones I do have are mostly pregnant and can’t come to the wedding, so I had to look for people to replace them.”

“Just imagine you’re at the wedding of a close friend of yours,” she told me after we exchanged pictures. “If you arrive at the wedding, first visit the bride’s waiting room and say hi to me. Also, you have to be there when we’re taking the group photo.”

“Will there be someone else coming as well?” I asked.

“Yes,” she said, “someone from Gwangju, Gyeonggi, will be coming with her boyfriend. They’ll be getting married in July.”

And so, on April 23, I became a stranger at someone’s wedding. When I arrived at the wedding hall at 11:00 a.m., I visited the bride’s waiting room first, as she had instructed me to do.

The bride-to-be, adorned in her elegant white wedding dress and full make-up, hesitated for a moment, staring at me with a blank expression. Then, suddenly, she smiled and waved.

“You came early,” she said, introducing me to another person. “This is a close friend of mine.”

After a rather awkward handshake, the other person and I entered the wedding hall. Less than 100 people were seated inside. Most were relatives of the bride and groom. Unfortunately, I was unable to locate the other person who had answered the online post.

After the ceremony, the bride and groom and all the guests gathered up front to take a group photo. “Colleagues and friends of the bride and the groom please step forward,” said the photographer. Since I was pretending to be a close friend of the bride, I stood right next to her.

A week after the wedding, the happily-wedded bride sent me a message.

“Thanks so much for coming,” it said. “I can’t wait to come to yours!”

As it happens, many Koreans tend to think that the number of guests at their wedding is representative of their personal network. Some, desperate to avoid the worst-case-scenario in which they are married with only a few guests present, will even pay strangers to pose as their friends at the ceremony.

According to a survey conducted by the JoongAng Ilbo and DUO Wed, a wedding consulting company, from April 11 to April 25, out of a total of 361 participants, over 66 percent confessed that they’ve been worried that their wedding ceremony might be short of guests.

“Many of the company’s clients say they are worried about having fewer guests coming than their partner or other guests talking about how the seats at the events are empty,” says Kim Ye-won, the head of DUO Wed. “Some even ask whether the company can connect them to a company where they can hire people to come as guests.”

A typical company offering such services generally charges 20,000 won to 50,000 won ($17 to $42) per hour, which includes a photo opportunity and a friendship that lasts for the duration of the ceremony.

Korea’s chaemyeon culture, by which people become overly concerned with how others view them, certainly contributes to this phenomenon.

“People’s phobia over marrying in solitude clearly shows an aspect of Korean society where people put priority on how others see them,” says Yoon In-jin, a professor from Korea University’s department of social studies.

Other feel this trend bears a more ominous message. Choi Hang-seop, for instance, a professor at Kookmin University’s department of sociology, says, “The fact that more and more people are hiring others to pretend to be their friends at the wedding means that Korea is tilting towards becoming an isolationist society.”