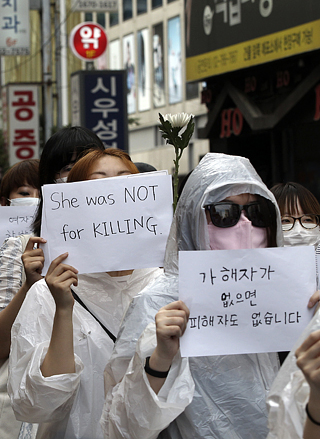 Mourners march during a rally on Saturday to pay tribute to a South Korean woman who was stabbed to death near Gangnam Station in Seoul. [AP/NEWSIS]

Police tentatively concluded that the case of the man who murdered a 23-year-old woman in a bathroom near Gangnam Station was the result of his schizophrenia and not a hate crime against women.

The authorities’ announcement on Sunday comes after two rounds of psychological analyses by five profilers examining the 34-year-old culprit, including Kwon Il-young, the lead profiler in the country.

Kim was diagnosed with schizophrenia in 2008 at a hospital, and since then has been hospitalized six times. Police said Kim showed signs of paranoia as early as 2003, when he allegedly told people around him that he can hear people swearing at him.

“From 2008, Kim showed signs of lacking the basic ability to take care of himself,” police said, “like not taking a shower for more than a year. By the time of his crime, his paranoia was at a critical high, though Kim himself is not aware of his mental condition.”

On Tuesday morning, when he committed the murder, he was four months off his medication and two months into living on the streets.

Kim himself denied any misogynist feelings as part of his reason for stabbing the woman, who walked into the bathroom near Gangnam Station at around 1:00 a.m. on Tuesday.

“I did not commit the crime because I hate women,” the culprit, surnamed Kim, told police. “I am not a misogynist.”

“I did it because women inflicted actual harm on me,” Kim said.

When asked to explain his statement, Kim told police that women would shoulder check him on purpose when walking in and out of subways, or walk slowly in front of him to make him late for work, or even throw cigarette butts at him.

“The culprit makes decisions based on his feelings alone,” police said. “Once he feels something to be true, it becomes the truth for him.”

Kim told police he has felt victimized by women ever since he attended a theological seminary two years ago. Police deduced that a recent happening at work provoked Kim to commit the murder.

Kim was working as a server at a restaurant until May 7, when the manager suddenly switched him to kitchen work, citing his poor hygiene as the reason. Kim allegedly understood this change as having been manipulated by his female coworkers, whom he said talked behind his back.

“I could not stand that women were harming me even at work,” Kim allegedly told police. “I needed to kill them first, before they could get to me.”

“In criminological terms, when a culprit attacks a certain group due to paranoia, it does not translate into a hate crime,” police said. “For instance, if someone kills three people of a certain race out of paranoiac fear, authorities see that as a crime stemming from mental illness, not as a racist hate crime.”

Kim initially told authorities that he killed the woman out of vengeance because he felt that women looked down on him, leading many to label the murder as a hate crime against women.

When it was revealed that Kim let six men, who walked into the bathroom before the female victim, walk free, this only added fuel to the fire.

The public display for mourning that began with hundreds of Post-it notes on Exit 10 of Gangnam Station from Wednesday morning exploded into a nationwide movement within 24 hours, quickly spreading to Busan, Daejeon and Daegu.

Hundreds of Post-it notes mourning the death of the woman cover a heart-shaped structure near the shopping complex Judies Taehwa in Busanjin District, Busan, after a few students began to post notes on the structure on Thursday.

Some 500 people, many of them women in their 20s to 30s, gathered on Saturday evening near Exit 10 of Gangnam Station to hold a memorial ceremony.