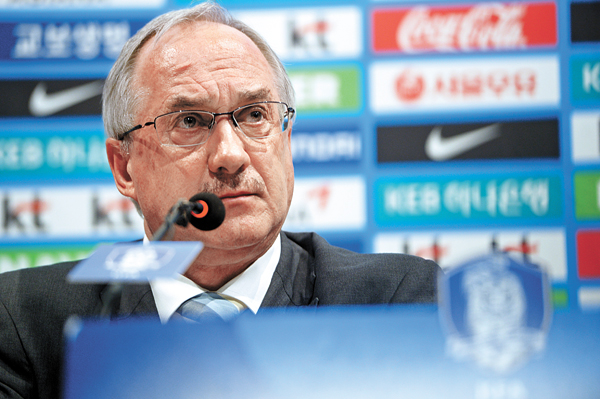 Uli Stielike announces the 20-man roster for the upcoming friendlies at the Paju National Football Center on Monday. The team will take on Spain on June 1 and Czech Republic on June 5 in Europe. [NEWSIS]

The roster for the Korean national football team’s upcoming friendlies in June against Spain and the Czech Republic was announced Monday.

During the press conference held on Monday at Paju National Football Center (NFC), national team manager Uli Stielike unveiled the list of the 20 players for the friendlies slated to take place in Europe in June. Compared to the roster in March for the regional World Cup qualifier against Lebanon, Stielike welcomed six new faces while excluding nine players from the list, most of whom are struggling to find playing time for their European teams.

When asked about why he selected only 20 players instead of his usual 23, the German-born manager said, “Leading the national team in the past 20 months, I realized if I bring 23 players for a game, four to five of them never get a chance to step on the pitch. I didn’t want anyone to return to Korea without playing a minute after the long journey to Europe.

“There are many Europe-based players that didn’t make it into the team this time,” he added, emphasizing his criteria for selection. “I … warned in March that if players cannot grab opportunities to play for their clubs, it will be difficult for them to play for me. Nothing has changed since then.”

Most notably, winger Lee Chung-yong of Crystal Palace, who has not appeared regularly in matches for his London-based team, was left out of the roster. FC Augsburg’s Koo Ja-cheol, Hoffenheim’s fullback Kim Jin-su and Bortumund’s Park Joo-ho didn’t make the cut either. Koo was dropped because of a toe injury, while the other two were excluded because of lack of playing time. 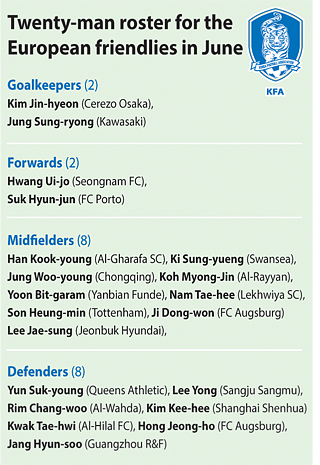 The roster features some new names, including Yoon Bit-garam of China’s Yanbian Funde, who has established himself as the playmaker for the team. This is the first time Yoon rejoins the national team in three years and eight months. “I’ve watched two of Yanbian’s matches this year to examine Yoon,” Stielike said. “With Koo missing from the middle with injury, I thought Yoon could play in his stead.”

In addition to Yoon, Stielike decided to bring in Al-Rayyan’s Koh Myong-Jin and Nam Tae-hee of Lekhwiya SC in Qatar to bolster the middle. Augsburg’s Ji Dong-won will move around the middle and front of the pitch to add momentum on offense.

Another name that was missing from the roster was Lee Jeong-hyeop, who has been called the “prince of Stielike” after the relatively unknown strikers was scouted by the manager himself. The decision comes as a surprise since Lee is the one who lifted the team on March 24 against Lebanon after scoring the only goal of the game. Instead of Lee, Suk Hyun-jun of FC Portu and Hwang Ui-jo of Seongnam FC were chosen as the team’s strikers.

“It was a difficult decision between Suk and Lee,” said Stielike. “Although Suk isn’t featured regularly in the league, he is playing for the elite team Portu and has shown some good performances in the field. We will have to see where he is at physically but at the moment, I decided to go with Suk. For Lee, the national team coaching staff had their eyes on him in weekends but he couldn’t live up to our expectation as the striker for his team.”

Once again, Ki Sung-yueng and Son Heung-min proved that they have shown their faith in Stielike. Ki has postponed his mandatory four-week military training to join the team in Europe, while Son, a wild-card for the Olympics team, is to miss the Olympics prep tournament next month to play for Stielike.

“Ki was adamant about playing in the friendlies so he decided to delay the boot camp. I was glad to hear that players such as Ki and Son who just finished the season at their clubs wanted to start training early in preparation for the friendlies,” Stielike said.

While the team won’t officially be convened until May 29, some of the players, including Europe-based players such as Ki and Son, volunteered to give up their two-week leave and start training early on Monday. “Europe-based players have some time off since the season ends earlier,” said Ki on Monday. “But we figured we couldn’t just rest so we asked for early training sessions. We cannot take on Spain with just three days of training. Players all agree that we need to prepare as much as possible.”

“Spain and the Czech Republic are much higher in the FIFA rankings compared to us,” Stielike said about the upcoming friendlies. “But I have always wanted a friendly match like this. As we climbed up to the top in Asia, I expect that the upcoming games will give us some idea on where we are at globally.”

And Stielike is determined to win. He says even though the odds are against the Korean team ranked at No. 54, they will play against No. 6 Spain and No. 29 Czech Republic intending to win, emphasizing that without such a mindset there wouldn’t be a point playing the matches.

The national team plans to travel to Europe on May 29 and play Spain in Salzburg, Austria on June 1 and then Czech Republic in Prague on June 5.