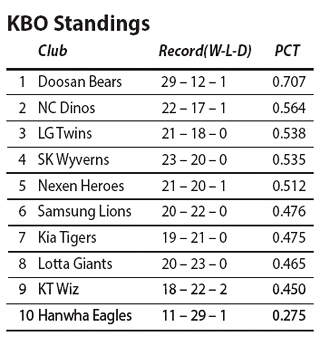 KT Wiz finally escaped from its week-long slide on May 22 after crushing Hanwha Eagles 18-7 at the Hanwha Life Insurance Eagles Park in Daejeon.

Since its last win on May 14 against NC Dinos, the Wiz simply couldn’t get their heads straight and recorded two draws and four losses until Sunday to finally cut the cord on the four-game skid. After the win on Sunday, the season record for the Wiz stands at 18 wins, two draws and 22 losses.

Wiz starting pitcher Travis Banwart tossed for five and 2/3 innings while giving out nine hits, one base on ball and seven runs, including four earned runs, but was able to come out with a win with the help from the batting lineup despite a poor performance. With back-to-back home runs by Andy Marte and Kim Sang-hyeon in the first inning giving an early lead to the Wiz, the team extended the gap in the second inning by driving in four runs. It rejected the comeback attempt by the Eagles when the Wiz scored four points again in the seventh inning.

“The batting lineup showed an outstanding amount of concentration,” said Cho Beom-hyeon, the manager of the Wiz. “The home runs from early in the game gave us the momentum and allowed us to widen the lead towards the middle of the game. Kim did his role as the fourth batter of the team.”

The batters’ explosiveness on the plate helped the Wiz tremendously. Its batting lineup slugged 22 hits, including five homes. 22 hits are the most hits in a single game for the Wiz.

Added to the assist from the plate, reliever Cho Mu-geun’s performance was also the main driver behind the win. Cho shut down the Eagles’ offensive effort by allowing only one hit and no runs during two and 1/3 innings.

“Cho began playing his game again on May 21 and assumed an important role in today’s win. His fastballs and sliders were all remarkable,” said Wiz manager about Cho Mu-geun. 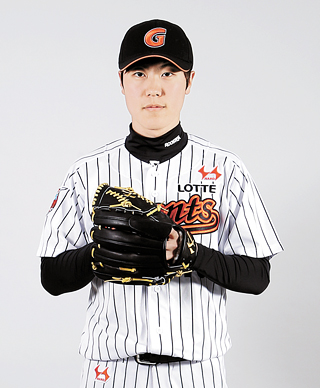 Lotte Giants got an unexpected new talent for the team when a pitcher who has not tallied a single win in the first division league, carded his first win during his top league debut. The hero on Sunday was Park Jin-hyung.

The 22-year-old right-hander started for the Giants on May 22 against the defending champs Doosan Bears. Park tossed for five innings and allowed only two hits, no runs and three base on balls while striking out two Bears hitters. Grabbing his first win in the first league, Park pulled his team back from the verge of losing all three games over the weekend.

The Bears pitcher that Park had to go up against was ace foreign pitcher Dustin Nippert. It was a David and Goliath challenge. Added to the pressure, the Bears’ batting lineup has been on an astonishing pace, scoring 19 points in a single game on May 20. For Park, Nippert and the Bears hitting lineup simply seemed to be too much.

But Park proved everyone wrong. Although Park continued to be under stress, including the loaded bases with two outs at the top of third inning, he managed to bypass them all without conceding any runs. He mainly threw fastballs and forkballs with some sliders and curveballs here and there. Park’s aggressive pitches were enough to force the Bears power hitter off the plate.

Park didn’t let his guard down even in the fifth inning when the Giants were ahead at 7-0, striking out three batters quickly to conclude the inning.

Park, who joined the Giants in 2013, had to take a year off in 2014 due to elbow surgery and he played in the second division team last year before joining the top division team during the spring camp. Although he didn’t make it to the opening day roster, he was eventually called up 13 days after opening day. With Giants pitching lineup in trouble due to incessant injuries, Park’s appearance has given the Giants coaching staff some hope.