Women’s team is on the road to Rio

Women’s team is on the road to Rio 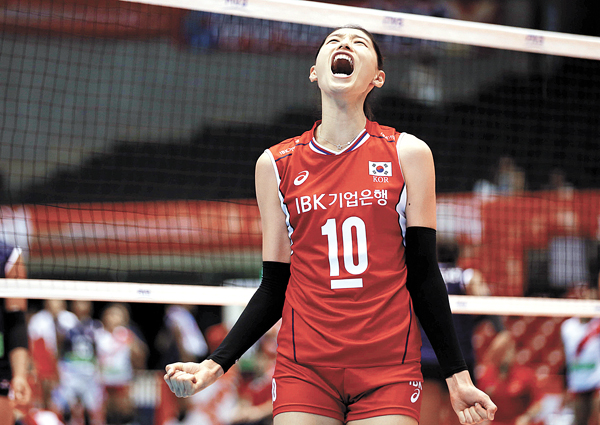 Outside hitter Kim Yeon-koung screams after putting up a point for the Korean side during the Olympics qualifier on May 20 against Peru. [NEWSIS]

The Korean women’s volleyball team lost to the Dominican Republic in Japan on Sunday ­-­ but they don’t care.

Coming fourth in the qualifiers, they won the right to take part in the biggest sporting event in the world, this summer’s Olympics in Rio.

Now, the team is full of enthusiasm to return from Brazil with a medal, for the first time in 40 years. The only time the Korean women’s volleyball team won a medal in the summer games was in 1976. The team led by head coach Kim Han-soo brought home a bronze medal from Montreal.

This summer Korea, ranked ninth in the world, is placed in Group A along with No. 3 Brazil, No. 4 Russia, No. 5 Japan, No. 12 Argentina and No. 21 Cameroon with top four teams per group qualifying for the quarterfinals

The deal-breaker will be the match against archrival Japan. In the past five years, Korea’s record against Japan is three wins and 11 losses. But the Korean team seems to have the momentum at the moment against Japan, coming out of a 3-1 win over the Japanese national team on May 17.

“I am happy to be qualified for the Olympics,” said Kim Yeon-koung. “We hope to bring home success from the main stage at Rio.”

As expected, team’s ace Kim Yeon-koung was targeted with serves and hits in every match of the qualifiers, and was personally marked by at least one blocker of the opposing team throughout the tournament.

However, no longer were they a one-man team, depending heavily on Kim Yeon-koung. When the ace hitter was on lockdown due to a fortified defense, players like Kim Hee-jin and Park Jeong-ah stepped up to lead the offense as well as the defense. And national team rookies such as Yeum Hye-seon had their backs when needed.

“Everyone has shown a tremendous amount of development,” said Lee Jung-chul, the head coach for the team. “I think we can expect decent results from the summer games.”

In his playing days, Lee was a middle blocker and outside hitter but was never in the limelight.

Starting his volleyball career later than others at the age of 16 in 1976, he went on to play for Sungkyunkwan University and then at the predecessor to the current Gumi KB Insurance Stars for five years before retiring. After stepping down as a player, he worked as an administrator for the team.

Lee’s volleyball career peaked in the leadership position. His decisiveness and accurate analysis of the game has made him stand out as a coach. Beginning his coaching career at his alma mater in 1989, it only took him 16 years to find a place in the national team coaching staff. After becoming a coach in 2005, he took over the head coach position just two years later in 2007.

Lee was always able to find opportunities in times of crisis. After he assumed the top post for the national team, some of the key players, including outside hitter Kim Yeon-koung, were excluded from the national team for various reasons including injuries.

Lee took the team to the Olympics qualifiers in 2008 but came out with two wins and five losses. For the fourth time in a row, the women’s national team failed to go to the Olympics stage. “Sleep eludes me when I think about 2008,” said Lee. “After we were disqualified, setter Kim Sa-nee came to me and cried her eyes out while saying she’s sorry.” Lee quit as the head coach for the national team after 2008.

After a few team adjustments, the national team went to the 2012 London Olympics and placed fourth in the tournament. Despite success in the London Olympics, their chance to go to the Rio Olympics this year seemed bleak at best, with almost everyone from the 2012 Olympics roster gone, except ace hitter Kim Yeon-koung.

Lee came back to nurture the team again in 2015. “No matter what happens, we will make it to the Rio Olympics,” said Lee after taking over the head coaching job. “The opponents will concentrate their effort to mark Kim Yeon-koung, so we will have to spread the offensive opportunities around to others.”