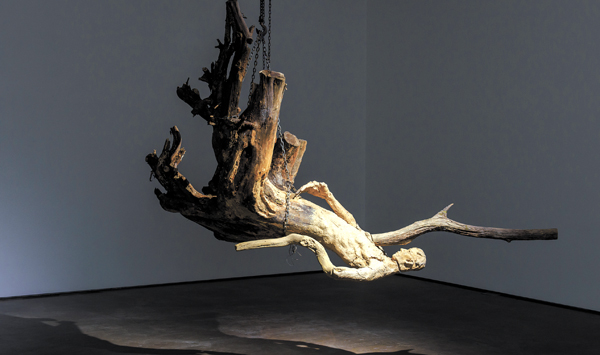 The Arario Gallery Seoul is holding a solo show of Ryu In, who took a unique position in the Korean art scene of the 1980s and ’90s with his figurative sculptures of a tragic mood and who died at the age of 43. The sculpture “Title Unknown” is being unveiled to the public for the first time in the show. [ARARIO GALLERY]

In the center of Arario Gallery Seoul’s basement floor, a grotesque sculpture hangs from the ceiling.

It is a large piece of an old tree combined with a human figure with the texture of soil. The figure could look like it is being pierced by the tree’s branches, or like it is emerging from the branches.

The sculpture is one of the last works by Korean artist Ryu In (1956-99), who died at the age of 43. He took a unique position with his figurative sculptures of tragic tone in the Korean art scene of 1980s and ’90s, during which abstract sculptures were dominant. The sculpture is part of his solo exhibition “Ryu In: The Boundary and the Between” at the gallery in the art zone east of Gyeongbok Palace.

Pointing to the sculpture, of which title is unknown, Ryu’s widow, Lee In-hye, 54, told the Korea JoongAng Daily on May 11, “When he was working on it, I felt awe mixed with horror ... I felt the work was eating into the artist.” 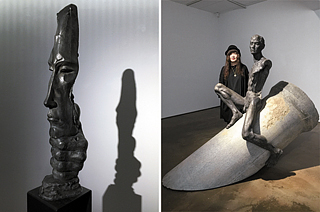 Left: Ryu In’s 1986 sculpture “Cause of Death” is installed on Arario Gallery Seoul’s second floor. Right: Ryu’s widow, Lee In-hye, stands behind the artist’s 1988 sculpture “Entering the Mountains” on the first floor. The sculpture is on display for the public for the first time. [MOON SO-YOUNG]

“So, for a time after his death, I shuddered to touch it,” she continued. “But I think now it’s time to show it to the public.”

Three of the nine works on display in this exhibition, including the “Title Unknown,” are being unveiled to the public for the first time.

The exhibit also includes Ryu’s famous works such as “Cause of Death”(1986), “Motive for Murder” (1991) and “Yellow Ocean Current II” (1995). In all these works, male bodies are depicted with steely muscles and tendons that are surrealistically distorted or fragmented, as if the man’s inner agony and conflicts caused the tragic transformations.

“[In Ryu In’s works,] the protagonist ‘I’ always suffers indescribable deficiency, despite strong muscles and strength,” wrote art critic Choi Yeol for the exhibition catalogue. “He perfected the impressive tragic pathos - the tradition of Western classic sculptures - in the different setting of the Korean Peninsula.”

Choi also said Ryu “was resurrected faster than any other artists who died young,” noting that he is now regarded as the third master of Korean 20th-century figurative sculptors, following Kim Bok-jin (1901-40) and Kwon Jin-kyu (1922-73).

Born as the youngest son of famous abstract painter Ryu Gyeong-chae (1920-95), Ryu In took to sculpture out of desire to escape from the shadow of his father, according to Lee. But he had a weak constitution from youth. Hard work and excessive drinking led to a variety of ailments including tuberculosis and liver disease, which caused his early death.

“The desire to rise up and the hole of infinite darkness are repeatedly crossed in his works,” wrote art historian Kim Mi-jung for the catalogue. Noting its relation to his recognition of physical limitations, she continued, “The extreme expression of dismantled, crushed bodies [in his works] originates from the unbearable pain of the flesh and bone [he experienced].”