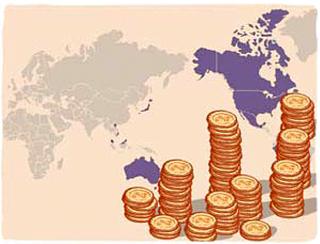 The Bretton Woods system, launched by 44 nations in the mid-20th century, was designed to uphold stable foreign exchange rates and balance the countries’ current-account payments. The International Monetary Fund and World Bank were created to ensure countries followed through.

The system broke down in the mid-1970s after the United States unilaterally ended the convertibility of the U.S. dollar to gold, making other currencies go free-floating against market supply and demand. Since then, foreign exchange policy has been left to independent governments.

Currency policy became an issue of controversy and conflict after China emerged as a trade and industrial powerhouse. China had pegged the dollar to 8.28 yuan for more than a decade from 1994. The United State’s deficit against China widened fast along with staggering pace of growth in exports by the Asian trade behemoth. China’s foreign reserves shot up to $4 trillion by mid-2014 from $200 billion in 2000. The U.S. deficit in commodity trade ballooned to $68 billion in 2005, tantamount to 6 percent of its gross domestic product.

The U.S. Congress has been pushing for legislation licensing retaliatory actions against countries whose currency policy aids exporters and worsens the trade balance with the world’s largest economy. Nobel Prize-winning economist Paul Krugman and Fred Bergsten, founding director of the Peterson Institute for International Economics, are outright critics of China’s policy of undervaluing its currency.

Beijing maintains that it does no such thing. It is well aware of the consequences of a U.S.-led move to tame other countries to improve its balance sheet. Japan has never recovered after it was forced to appreciate its currency under the Plaza Accord in September 1985.

But the push for U.S. legislation to punish so-called currency manipulating states had not been possible under the World Trade Organization framework. The U.S. response to currency manipulation is based on the Omnibus Trade and Competitiveness Act of 1988. The Treasury Department can embark on negotiations with the state suspected of manipulating currency. But the act does not specify what punitive actions it can take. This is why the treasury’s foreign exchange evaluation released twice a year did not scare other countries — until recently.

That changed after President Barack Obama signed the bipartisan Bennet-Hatch-Carper (BHC) amendment to crack down on countries that unfairly weaken their currency on Feb. 24. The amendment allows Washington to exclude the countries suspected of currency manipulation from U.S. public procurement projects or disallow subsidies to investment to the countries. Washington also can ask for tougher supervision and cooperation from the IMF. The law allows the United States to avoid outright violating the WTO regulations banning direct sanctions but nevertheless endorses indirect punitive actions. The BHC is now being feared as the next Super 301 Act.

The law requires the U.S. Trade Representative to consider a country’s foreign exchange status before embarking on bilateral trade negotiations. Korea, China, Japan, and Taiwan are all on the “monitoring list” in a recent semiannual report, and this can affect the governments’ prospects in trade talks with Washington — including the U.S.-China trade accord, services trade talks that include Korea, Japan, and Taiwan, and Korea’s bid for the Trans-Pacific Partnership (TPP). The TPP members are required to publicly report their data related to foreign exchange. Governments with questionable currency policies now can face setbacks.

Korea was on the “monitoring” list in last month’s Treasury report and can avoid sanctions for now. But the fact that it was cited can undermine its chances in winning membership to the TPP and U.S. investment. The Treasury Department listed Germany, Japan, and Taiwan as countries that rake in hefty surpluses in trading with the United States alongside its primary target, China.

Korea has been trying desperately to address sagging exports. The exports that drive the Korean economy have become stagnant since 2010 and sank sharply from last year.

The government is striving to solve this through restructuring, fostering new growth in various industries and diversifying export markets in order to up trade. There are growing calls from the business sector and government to weaken the won to promote exports. But such a move would bring about more harm than good. Korea has been keeping up sizable surpluses in current-account balance because imports fall faster than exports due to depressed domestic demand and industrial activity. Seoul could risk trade friction with Washington if it interferes in the currency market. Korea must revamp its overreliance on external trade to ensure long-term stability and sustainability of the economy. Tough times require more farsighted economic policy.
Translation by the Korea JoongAng Daily staff


*The author is a professor at the Graduate School of International Studies, Seoul National University.