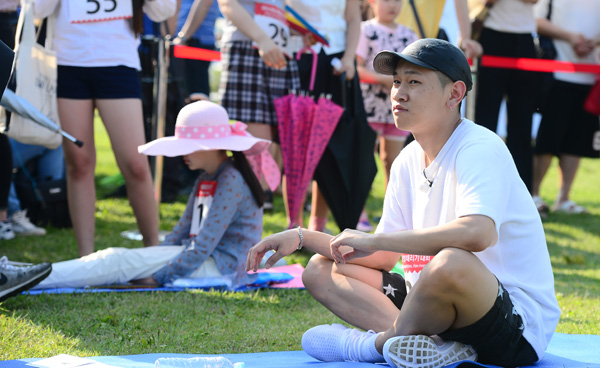 Korean singer Crush has won a contest that involved doing nothing.

The singer on Saturday became the first celebrity winner of the third annual Space Out Contest, in which participants are required to do nothing other than sit on the ground.

The contest was held at Ichon Hangang Park in central Seoul, and about 60 people who made it through the semifinals competed for about 90 minutes under the blazing sun.

With the tagline of “Relax your brain,” the contest doesn’t allow participants to use phones or electronic devices, frequently check their watches or sleep.

After winning the contest, Crush told the media, “I needed a break from album recording. I highly recommend this to those who have headaches or who have many thoughts.”

It has been reported that the festival organizer regularly checked participants’ heart rates, Crush’s remained the most stable.

British daily newspaper The Guardian wrote, “Dozens of people in one of the world’s most wired nations have taken part in Korea’s ‘space out’ competition aimed at promoting a life free from stress and information overload.”

Crush, 24, debuted in the music scene in 2012. Apart from pursuing a singing career, the versatile artist who can write, compose and produce has worked on the albums of up-and-coming hip-hop musicians such as Zion.T and Supreme Team.