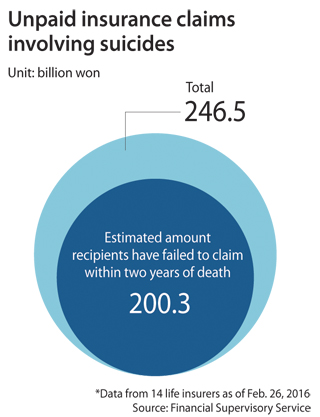 Life insurers have been ordered by the Financial Supervisory Service to make payouts owed to the families of clients who committed suicide, even if those families didn’t file before the two-year deadline.

As of February 26, life insurers had not paid 246.5 billion won on 2,314 claims involving suicides. Of those claims, 81 percent or 200.3 billion won hadn’t been filed before the industry-wide deadline.

The announcement by the financial watchdog on Monday came after the Supreme Court ruled on May 12 that life insurers should give the additional payouts they owed to the families of clients who committed suicide and were subscribed to certain policies with accident coverage.

These policies mistakenly categorized suicide as a type of accident and were sold between 2001 and 2010, when the companies realized the error.

The issue first emerged in 2012, when a man with one of the old policies committed suicide. The man’s parents discovered that his suicide was technically covered and went on to sue his insurer.

But even after the Supreme Court ruling, the companies have delayed making the payouts by claiming many of the families failed to file claims within two years of the clients’ deaths, which is the industry-wide deadline.

The court is currently looking into the issue.

“The insurers have to give full payouts to all who filed claims - whether or not they did so before the two-year deadline - because the companies failed to give out the additional amount under the accident compensation category as promised in the terms of the products,” Kwon Soon-chan, deputy governor of insurance at the FSS, said at a press conference on Monday.

“The insurers should not delay the payouts any longer by claiming they are waiting for a legal judgment on the deadline issue.”

The 17 life insurers involved have until May 31 to submit specific payout plans and recipients to the FSS.

Insurers who reject or delay making the payouts may face fines and high-level executives could be penalized, Kwon stressed.

“Of course we will pay the remaining amount as the Supreme Court ruled on May 12, but we’re still internally discussing further details, like whether or not to pay the families who missed the two-year claim deadline and whether or not we should take action before the court’s ruling comes out on the two-year deadline,” said a public relations official at Samsung Life, the industry’s largest player. Samsung Life owes 60.7 billion won in payouts.

Shinhan Life Insurance was the first to confirm on Friday it would pay the roughly 10.3 billion won it owes, but it didn’t say how it planned to handle families who failed to file within two years of a suicide.

The FSS’s order may spell financial trouble for some small and midsize life insurers, which are already suffering tightened international accounting standards, some industry members said.

“Big firms won’t be influenced much even after paying off the suicide payouts,” said a representative from Hanwha Life, “but smaller firms with heavy unpaid amounts due, which piled up over decades, may suffer if they have to reflect the losses on their balance sheet for a single year this year.”