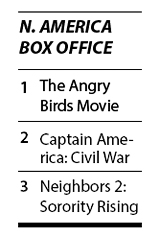 “Captain America” has found a worthy competitor in a bunch of flightless birds. “The Angry Birds Movie” soared to $39 million in its debut weekend, knocking “Captain America: Civil War” off its first-place perch, while new adult comedies “Neighbors 2” and the “The Nice Guys” struggled to get their footing, according to comScore estimates Sunday.

Rovio Animation spearheaded the production of “The Angry Birds Movie,” which cost around $73 million to make, and it opened strong internationally last weekend. The film has already earned $150 million worldwide, according to estimates from Sony, which is distributing the film.

“The Angry Birds Movie” features the voices of Jason Sudeikis, Josh Gad and Danny McBride and has received mixed reviews from critics in its attempt to create a compelling story out of a fairly simplistic app-based game. But audiences under 25 gave the film an A CinemaScore, which should help the film continue to perform well over Memorial Day weekend.

“It’s very difficult turning a video-game property into a successful movie,” said Josh Greenstein, Sony’s president of worldwide marketing and distribution. “To use a bad pun, we are flying high.”

Video-game adaptations have not had the best track record, but comScore’s Senior Media Analyst Paul Dergarabedian notes that the success of “Angry Birds” likely has more to do with its family appeal and ingrained brand recognition.

“Families are always looking for out-of-the-home content,” Dergarabedian said, noting also that this is the latest in a string of very successful PG-rated films including “The Jungle Book” and “Zootopia.”

“PG is the hot new rating now. There used to be a stigma that younger teens wouldn’t be interested,” he said. “The numbers prove that when you go after the broadest base possible, you can be highly successful.”

The PG-13 rated “Captain America: Civil War” wasn’t too far behind, earning an additional $33.1 million this weekend for a second-place spot, which brings its domestic total to $347.4 million. And, even in its third weekend in theaters, the superhero proved mightier than a fresh batch of R-rated comedies, “Neighbors 2: Sorority Rising” and “The Nice Guys,” both of which underwhelmed in their debuts.

“Neighbors 2” brought in only $21.8 million - less than half of the first film’s $49 million opening in 2014. But the film from director Nick Stoller also cost only $35 million to make.

Stars Seth Rogen, Rose Byrne and Zac Efron all returned for the sequel, which puts a new spin on the frat next door idea by having the young family’s new neighbors be a sorority comprised of girls upset about the unequal rules for fraternities and sororities.