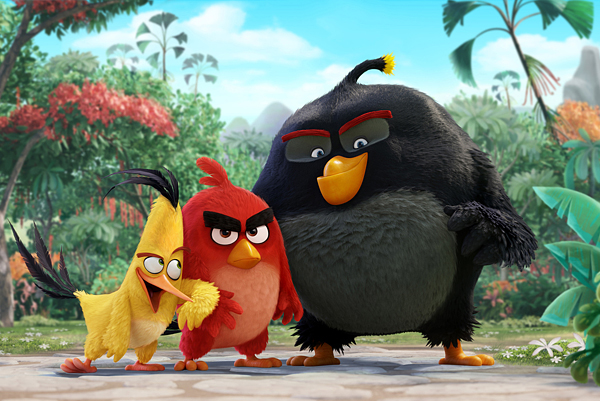 “The Wailing” saw 1.3 million admissions during the weekend, accounting for 58 percent of the box office sales. Its two-week total stands at 4.5 million tickets sold, which roughly translates to 37.2 billion won ($31.5 million).

Sony Pictures’ 3-D animation “The Angry Birds Movie” landed in second place in its debut weekend, attracting 248,152 moviegoers and becoming the top opener among films released in the same week.

Better known as the simple, repetitive but highly addictive mobile game made by Rovio, the film version of “Angry Birds” focuses on providing the backstory for why these birds became angry in the first place, following three iconic birds named, Red, Chuck and Bomb. 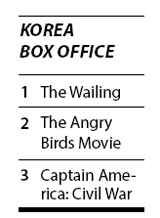 It made approximately 2 billion won here.

In the meantime, Marvel’s “Captain America: Civil War” stepped down to third place, adding another 182,661 tickets sold to bring its four-week total to 8.6 million admissions. It has made 71.7 billion won in Korean theaters so far.

“Canola,” a tear-jerking family drama starring Youn Yuh-jung and Kim Go-eun as a reunited grandmother and granddaughter, opened in fourth place with 168,775 admissions.

Directed by Chang of “The Target” (2004), the film delves into a heart-wrenching story where the younger one realizes too late that familial love, which can feel bothersome at times, is in fact the greatest source of strength and support in one’s life. The movie made 1.7 billion won in its opening weekend.

John Carney’s musical drama “Sing Street,” which is filled with the retro vibe of Dublin in the 1980s, enjoyed 136,696 admissions.