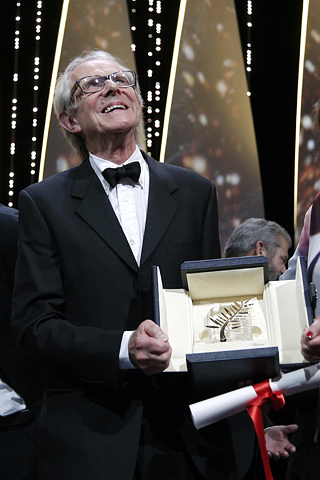 Director Ken Loach recieves the Palme d’Or for the film “I, Daniel Blake” during the awards ceremony at the 69th Cannes Film Festival in the city in southern France on Sunday. [AP/NEWSIS]

Veteran British director Ken Loach won his second Palme d’Or at the Cannes Film Festival Sunday for “I, Daniel Blake” - a stark portrayal of a disabled man’s struggle with the crushing benefits system in northern England.

The 79-year-old was presented the festival’s top prize by actor Mel Gibson at a ceremony on the French Riviera. Accepting the award, the silver-haired Loach punched his fists in the air in victory and said that he hoped his gritty, social realist movie would hold a mirror up to the impact of Europe’s policies of austerity on the poorest in society.

“We must give a message of hope, we must say another world is possible,” he said.

“I, Daniel Blake” chronicles a middle-aged widower from Newcastle who, after a heart attack, can neither work nor get government aid. It follows the sometimes comic, frequently painful frustrations as he winds his way through an archaic system that seems designed to bring him down.

Like many of Loach’s films, social politics is at the heart of “I, Daniel Blake” - which many critics have predicted could be his last.

“There is a conscious cruelty in the way that we are organizing our lives now, where the most vulnerable people are told that their poverty is their own fault,” Loach told reporters. “If you have no work it’s your fault you haven’t got a job. Never mind in Britain, there is mass unemployment throughout Europe.”

Loach has long brought his distinct portrayals of the British working class to Cannes - and is more a regular at Cannes than almost any filmmaker. He has had 12 films in competition at the festival over the years, including his Palme d’Or-winning “The Wind That Shakes the Barley.”

Although Park Chan-wook’s “The Handmaiden” didn’t win the top prize, it was not a total loss for him nor the two other Korean films that got invited to the festival’s non-competitive sections.

The lesbian thriller, which earned Park his third invitation to the prestigious film event, sold its distribution rights to 56 additional countries at Cannes, setting the new record for a Korean film by selling the film’s rights to a total of 176 countries. Previously, the record was set by Bong Joon-ho’s 2013 dystopian thriller “Snowpiercer,” which had its rights sold to 167 countries.

“After the film had its official screening at Cannes on May 14, there were explosive numbers of requests from foreign buyers,” said an official from CJ E&M, the film’s domestic distributor.

“Those who have already purchased the film’s distribution rights solely based on its seven-minute trailer were also satisfied after watching the whole film,” he added.

After its Korean wide release on June 1, “The Handmaiden” will take off on a world tour, starting with Taiwan on June 24, followed by France in October.

Yeon Sang-ho’s “Train to Busan,” which was invited to Cannes’ Midnight Screening section, and Na Hong-jin’s “The Wailing,” were also able to pull off satisfying runs at the international film event.

“Train to Busan” was hailed as the best Midnight Screening selection so far by festival Director Thierry Fremaux, in addition to receiving countless rave reviews in the international press.

“The Wailing” had some reporters confused about its ambiguous ending at the press conference, but its intense thrill factor was unanimously praised.

Canadian director Xavier Dolan picked up the runner-up Grand Prize, which has been seen by some critics as a vindication for him personally after his film “It’s Only the End of the World” garnered lukewarm reviews and triggered a spat between him and certain film critics. The 27-year-old won the jury prize in 2014 for “Mommy.”

The jury of the 69th Cannes Film Festival was headed by Australian director George Miller, who described the jury’s selection as “two words: rigorous and happy.”

The Cannes jury’s decisions are famously unpredictable, and take place behind doors closed to the press for the duration of the festival.

Romanian director Cristian Mungui, who was a favorite to win the Palme d’Or for “Graduation,” won the best director award, which he shared with French director Olivier Assayas for his paranormal thriller “Personal Shopper,” starring former “Twilight” star Kristen Stewart.