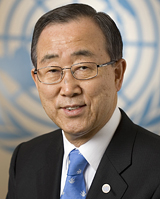 Amid speculation about the possibility that UN Secretary General Ban Ki-moon may run for president next year, multiple diplomatic sources told the JoongAng Sunday that the UN chief is establishing a foundation to support his domestic activities.

The sources indicated that two or three of the secretary general’s junior colleagues, who held high-ranking positions at the Korean Ministry of Foreign Affairs, were developing a Ban Ki-moon foundation that could be interpreted as a preparatory move for the upcoming presidential campaign.

“The issue of establishing a foundation is being discussed among people close by,” one former Korean foreign minister told the paper over phone on Saturday. “After Secretary General Ban steps down and returns to Korea, he will need an office, transportation and security, but the government and political circle are not paying heed to such issues, so I have stepped forward in this task.”

The former minister added, “There is a lot of interest in the political sphere on his next move after he retires and his every word is being scrutinized for political meaning, so we are proceeding very cautiously.”

He added, however, that he is not establishing the foundation upon the orders of Ban. But another source said, “While there were not any specific orders from Secretary General Ban, at the very least, it is happening with his consent and a shared understanding.”

One individual involved in forming the foundation explained, “it is customary to create such a foundation after a UN secretary general retires.”

Ban’s predecessor, former UN Secretary General Kofi Annan, after his retirement in December 2006, founded the Switzerland-based Kofi Annan Foundation the following year, which he also chairs. On the other hand, former President Kim Dae-jung retired from politics in 1992 after being defeated by Kim Young-sam in the presidential election that year, but he made a rebound in 1994 after establishing the Kim Dae-jung Peace Foundation for the Asia-Pacific Region and eventually went on to make a political comeback and was elected president in 1997.

Ban joined Korea’s Foreign Ministry in 1970 and served as foreign minister from 2004 to 2006 under the Roh Moo-hyun government. Should Ban decide to run in the presidential campaign, the foundation could perform as his campaign headquarters, collecting funds and producing his key aides.

In the domestic political arena, there is keen interest in whether Ban plans to run in the 2017 presidential race, especially following the April 13 general election defeat by the Saenuri Party, which lost its majority in the National Assembly.

In an interview with American journalist Tom Plate in 2013, Ban said he would be interested in writing a memoir after he steps down as UN chief. During a speech he gave at a dinner in April 2015, he mentioned his post-UN plans again, saying, “[I would like to] go to a nice restaurant and eat good food with my wife and look after my grandchildren.”

In an annual dinner at the Korea Society in New York last Wednesday, he evaded a question about whether he plans to enter politics next year, explaining that he still has seven months left as UN chief. He added, “I’d appreciate your help in bringing it to a successful conclusion.” Ban further said that such inquiries are “not helpful” to his work as UN secretary general.

Analysts, however, have taken his lack of a definitive answer as a suggestion that Ban is leaving his options open, and thus his upcoming visit to Korea, which begins Wednesday, will be watched with unusual vigilance.

After flying into the country from Istanbul, Turkey, where he will take part in the ongoing World Humanitarian Summit, he will deliver a keynote address at the 11th Jeju Forum for Peace and Prosperity on the southern island on Thursday.

He will then take part in a Group of Seven summit in Ise-shima in Japan, on Friday, before returning to Korea for the for the UN Department of Public Information/Non-Governmental Organizations (DPI/NGO) Conference, which will take place in Gyeongju on Monday.