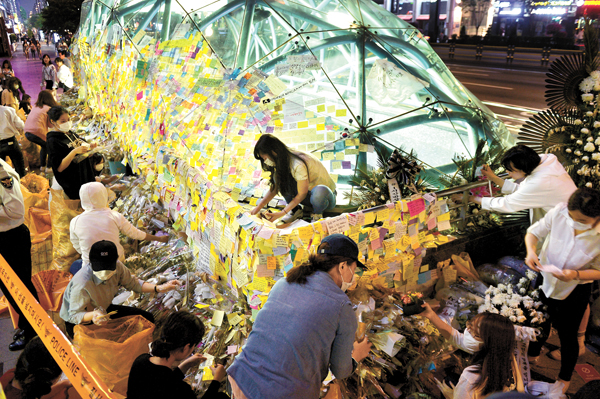 Volunteers who gathered after reading online posts pull down and collect Post-its at Exit 10 of Gangnam Station on Tuesday. [OH SANG-MIN]

People voluntarily gathered on Monday after reading online posts to pull down Post-its at mourning sites set up around the nation in memory of a 23-year-old victim stabbed to death by a stranger in a bathroom near Gangnam Station, in order to preserve them from possible rain.

Over the last five days, since the murder case near the Gangnam Station on May 17, thousands of people visited public-led mourning sites set up around the nation, including in Seoul, Daejeon and Daegu, to leave Post-its in the wake of the victim’s murder.

The removed memos, which were attached to Styrofoam boards, filled an entire 1.5-ton truck.

Significant and symbolic memos at the Gangnam Station’s mourning site will be exhibited on the ground floor of the Seoul City Hall.

The rest of the memos from the station and from other cities were delivered to the Seoul Foundation of Women and Family in Dongjak District, southern Seoul, reported Yonhap News Agency.

The Post-its, however, revealed a rather sad truth about Korean society. Namely, the prevalence of misogyny.

The gender battle was sparked after some people condemned the murderer, surnamed Kim, as a misogynist after the police announced that he killed the victim because he felt that women in general looked down on him, and after it was revealed that Kim let several men pass by while he was waiting in the unisex bathroom near Gangnam Station before he killed the victim.

Despite the police’s reluctance to label the case a hate crime against women, since the murderer was diagnosed with schizophrenia and had been hospitalized in psychiatric clinics since 2008, the public’s outrage did not subside.

The anti-misogyny movement, however, triggered a conflict after some criticized it as vilifying the entire male population. The tension grew stronger as people from two extreme online communities - Ilbe, a self-admitted sexist and xenophobic group, and Megalia, a radical feminist group, started attacking each other.

“Don’t generalize all men as women haters you Me-dwaejis,” read a note at Gangnam Station. Me-twae-ji is a combination of the word “Megalia” and dwaeji, which means pig in Korean.

“Korean men are cowards because they are insecure about their small genitals,” read another note, a statement that is often used by members of Megalia.

On Friday, a man in a pink elephant costume walked around the mourning site at Gangnam Station with a whiteboard displaying a written statement that read, “Not all carnivorous animals are evil, but animals that commit crimes are evil.”

The phrase implied that people should not all men together as misogynists simply because of the Gangnam murder case.

A Post-it that read, “This guy is an Ilbe user,” was stuck behind the man and people started hitting him and swearing at him.

The 31-year-old man later reported this event to the police on Saturday and they are investigating it along with two other reports of assault, including one against a female middle school student who held up a placard that said women-hating and men-hating is bad.

“The severe hatred that was pervasive online between Ilbe and Megalia was brought to the offline world due to this incident,” said Park Chang-ho, a professor at Soongsil University’s department of information sociology.

Jang Duk-jin, a sociology professor at Seoul National University said, “Korea is becoming a society filled with hatred against certain groups, not just women and men. If people keep such loathing and despair toward certain people in their mind, it becomes difficult to solve social structural problems.”