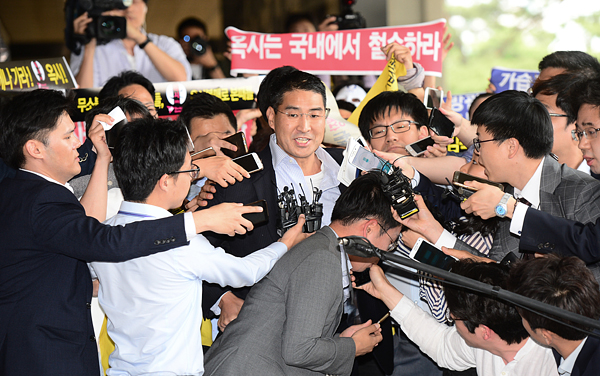 Former CEO of Reckitt Benckiser Korea, John Lee, is surrounded by reporters and victims of humidifier sterilizers, before entering the Seoul Central District Prosecutors’ Office on Monday. Lee, an American and incumbent CEO of Google Korea, is the first foreign CEO of the company summoned in the prosecution’s humidifier sterilizer probe. [NEWSIS]

Prosecutors on Monday summoned John Lee, former CEO of Reckitt Benckiser Korea and current CEO of Google Korea, to question him on whether he had knowingly sold the Oxy line of humidifier sterilizers that allegedly sickened and killed more than 100 people, many of them pregnant women and infants.

Lee is an American citizen and the first foreign CEO of the Oxy manufacturer summoned by prosecutors in its humidifier sterilizer probe.

“I am truly sad [for what has happened],” Lee told reporters in Korean before waking into the Seoul Central District Prosecutors’ Office on Monday. “I will remain most cooperative to the prosecution investigations,” he reportedly added in English.

Arriving some 30 minutes before the scheduled hour of 2 p.m., Lee was bombarded by reporters, victims and victims’ family members, making it difficult for him to enter the building.

Lee was summoned to be questioned about whether he was aware of the Oxy sterilizer’s toxicity at the time of its sale, when he was the executive of the company, and whether he had received reports by consumers complaining of any side effects. While Lee was the CEO of the company from 2005 to 2010, the Oxy sterilizer was reportedly No. 1 in the humidifier sterilizer market, selling some 360,000 bottles per year and securing roughly 60 percent of the market.

According to data procured by the prosecutors as of April, a total of 221 people were sickened after inhaling toxic chemicals from the humidifier sterilizers. It was determined that 177 of them were Oxy users, 70 of whom died.

Along with Lee, prosecutors on Monday summoned a former customer service department employee of the company in order to question whether he had properly reported consumers’ complaints concerning side effects of the product.

In their search through the computer servers and emails of Reckitt Benckiser Korea in February, prosecutors found that the company deleted these customer complaints from its website.

Earlier this year, prosecutors put together a special investigation team and have been summoning executives and managers of Reckitt Benckiser Korea, including former CEO Shin Hyun-woo, who served as the executive when the company produced sterilizers containing the fatal compound, polyhexamethylene guanidine (PHMG).

Ulrich Hosterbach, the company’s German finance director, also made an appearance at the prosecutors’ office on Thursday.

Meanwhile, a victims’ group filed charges against former Environment Ministers Kang Hyon-wook and Kim Myung-ja on Monday for failing to test the toxicity of certain humidifier sterilizer compounds, such as PHMG.