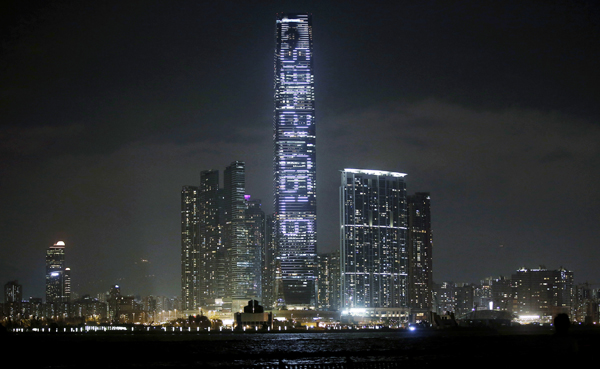 The artwork “Countdown Machine” featuring LED lights on the 118-story International Commerce Center’s facade to display the number of seconds left until June 1, 2047, the date of “one country, two systems” expires, in Hong Kong. Days after it was launched, organizers canceled the art installation. [AP/NEWSIS]

HONG KONG - Days after it was launched, organizers have canceled an art installation on Hong Kong’s tallest skyscraper that carried a politically provocative message about the city’s relationship with mainland China.

The organizers of a large-scale public art exhibition said in a statement Sunday that they were dropping the light show on the building’s exterior, which featured a countdown to the end of Hong Kong’s status as a special region of China.

Local artists Sampson Wong and Jason Lam used the LED lights on the 118-story International Commerce Center’s facade to display the number of seconds left until June 1, 2047, to stir debate amid growing concerns about Hong Kong’s future under Beijing’s rule.

However, the Hong Kong Arts Development Council and the show’s curator said the artists changed the show’s title and their explanation of what it represented without consulting them.

They said in their statement that the “disrespect” shown by Wong and Lam against the original agreement “put at risk any future possibility to work further in the public space.”

The installation’s debut last week was seen as especially subversive because it occurred during a visit by the Chinese Communist Party’s No. 3 official, Zhang Deijiang, although the artists have said the timing was coincidental.

Originally named “Our 60-second friendship begins now,” Wong and Lam renamed the artwork “Countdown Machine” after the exhibition opened. They also changed its original description, a reference to a scene in director Wong Kar-wai’s movie “Days of Being Wild,” to a more politically sensitive theme: the “ongoing struggle” to determine Hong Kong’s fate.

A former British colony, Hong Kong became a specially administered region of China after Beijing took control in 1997 and retains civil liberties unseen on the mainland and considerable control over its own affairs. However, Beijing’s tightening grip on the city has sparked anxiety among residents about what will happen after its 50-year special status expires in 2047. AP