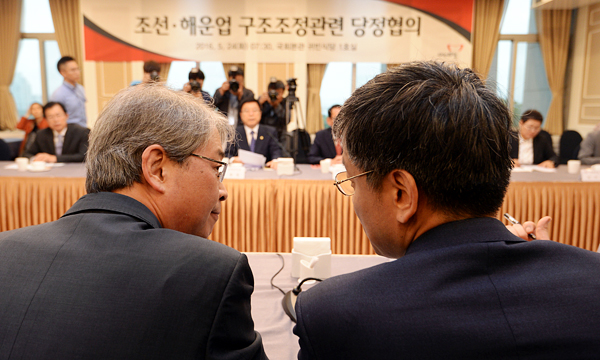 Financial Services Commission Chairman Yim Jong-yong, left, and Vice Minister of Strategy and Finance Choi Sang-mok, talk at a meeting of the government and political leaders at the National Assembly in Yeouido, southwestern Seoul, on Tuesday. [NEWSIS]

Politicians are meddling in the restructuring of the shipping and shipbuilding industries by encouraging the government to support workers that may be laid off - and seeking punishment for bad managements in the industries.

The ruling Saenuri Party and the Ministry of Strategy and Finance, the Financial Services Commission and the Ministry of Employment and Labor met Tuesday to discuss categorizing the shipping and shipbuilding industries as being worthy of special hiring support by the government within the first half.

If the industries are recognized as such, companies will receive financial support to maintain their current workforces. The support will also go to training programs and a one-month extension of unemployment checks to workers that are laid off.

The Korea Offshore and Shipbuilding Association in May became the first industry group to apply for such support. The system was first adopted late last year.

“The Saenuri Party has requested the government consider naming the industry for special support within the first half and the Ministry of Employment and Labor said it would positively look into it,” said Rep. Kim Gwang-lim, Saenuri Party’s chief policy maker.

The government and the party also discussed the possibility of giving a grace period to companies that are to undergo restructuring for paying the four mandatory insurances including national health insurance and employment insurance as well as other payments such as a disability employment fine. Companies must pay the government a fine when its employment of workers with disabilities falls short of a given quota.

The opposition Minjoo Party of Korea is demanding the government act against managements accountable for the dire situation of the shipping and shipbuilding industries.

“There are questions as to whether the creditors including Korea Development Bank performed properly its role of raising the competitiveness of the industries,” said Rep. Byun Jae-il, head of the party’s policy committee.

The Minjoo lawmaker has demanded the government investigate Daewoo Shipbuilding and Marine Engineering (DSME), saying its main creditor KDB may have given improper amounts of loans considering the shipbuilder’s deteriorating condition.

“If the KDB acted responsibly, would they have appointed such people [as outside directors]?” Byun said.

Lawmakers raised possible illegal lobbying and other mismanagement by outside directors in the process of lending more to DSME.

Among outside directors that have been criticized for being parachuted into KDB since 2008 are former Park Geun-hye spokesman Yoon Chang-jung and former Saenuri Party lawmaker Cho Jeon-hyuk.

DSME has the largest debt among the shipbuilders: 18.3 trillion won ($15.3 billion).

“Discussing whether the government or the central bank finance restructuring just doesn’t make sense when an investigation of the cause of its insolvency should take place first,” Byun said.

Meanwhile, restructuring of the shipbuilding and shipping companies makes slow progress. The creditors of debt-ridden Hyundai Merchant Marine (HMM) agreed to the main creditor KDB’s proposal last week to convert part of the debts to equity.

The creditors are nine banks and the Korea Credit Guarantee Fund. The debt that will be converted into equity is 700 billion won: 60 percent of loans borrowed from creditors and 50 percent of private placement corporate bonds.