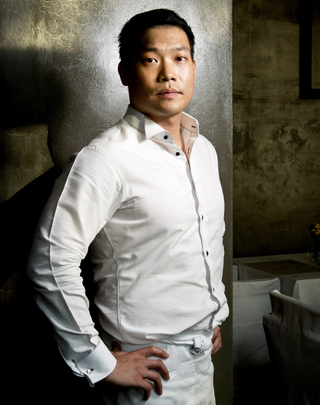 Star chef Lee Chan-oh’s agency has responded to speculation surrounding a short video clip in which he hugs a woman sitting on his lap who is not his wife.

The agency denied rumors that the chef is cheating on his TV celebrity wife, Kim Sae-rom.

“The video was shot at a party after Lee participated in the 2016 Jeju Food and Wine Festival,” the agency said in a press release on Tuesday. “The woman in the video is a mutual friend of Lee and Kim and the video was filmed by a person who worked as a part-time translator for the event.”

“The part-time translator filmed it for fun. How can you do that in the open if he’s really cheating on his wife?”

The 33-year-old chef runs a French restaurant in Cheongdam-dong, southern Seoul, and became famous after he began appearing on the hit reality TV show “Please Take Care of My Refrigerator” on JTBC.

On the show, where a slew of chefs create dishes based on the ingredients found in the refrigerators of celebrity guests, Lee steals the spotlight with his subtle techniques and picture-perfect plating.

The chef tied the knot with Kim August last year.