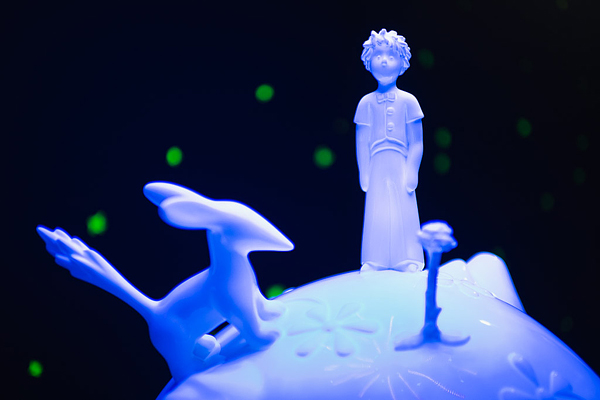 “The Little Prince” gives lasting lessons for generations to come, with humor and insights from the French pilot and writer, Antoine de Saint-Exupery. The Gyeonggi Provincial Museum is holding the “2016 The Little Prince Exhibition” until Sept. 18. Possessions of the author, first editions of the novel as well as touchable sculptures are all on display. [LE PETIT PRINCE EN COREE SECRETARIAT]

“All grown-ups were once children… but only a few remember it.”

This quote from “The Little Prince” leads readers to recall memories of their childhoods. The French writer and pilot Antoine de Saint-Exupery (1900-44) inspires the imaginations of even grown-ups as they go about the hustle and bustles of their daily lives.

Jean-Jacques Sempe is another artist who charges people with new energy and thoughts. His drawings with short captions reflect the pure minds of children - for example, his famous illustrations for the book “Le Petit Nicolas,” which was written by cartoonist Rene Goscinny.

Beginning this summer, exhibitions of the two French artists are welcoming visitors in Korea. They are unique in a sense that both children and grown-ups can enjoy, regardless of their age. 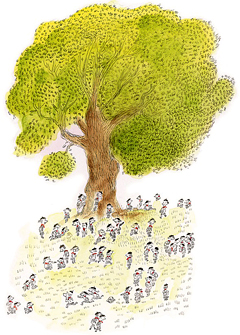 Children are frequent subjects of Sempe’s art, including “Enfances,” which he created in 2011.

In the book, the narrator runs into the little prince while he is stranded in the desert - until he can repair his plane. Before he returns home, he and the prince explore planets in the universe.

“The Little Prince” is believed to have born from the author’s own experience: He was a pilot for the French military during the Second World War. He was inspired to write the novella while he was stranded in the Sahara Desert when his plane, a Caudron Simoun, went down.

This interesting backstory of the novel and the author are revealed in the “2016 The Little Prince Exhibition,” which runs through Sept. 18. It was created in collaboration of the Saint-Exupery Foundation and the Gyeonggi Provincial Museum, located in Yongin, Gyeonggi, in part to celebrate the 130th anniversary of Korea-France diplomatic relations.

The author’s own illustrations for “The Little Prince”; some of his personal possessions such as his coat, suitcase and gloves; and the very first edition of the novel are being displayed in the first section of the exhibition. Supported by collectors around the world, most of the possessions are being revealed for the first time not only in Korea but worldwide.

Artist Arnaud Nazare-Aga intentionally made the sculptures to be touched. “I wanted to provide an opportunity where people can easily approach to the sculptures by touching and feeling them, unlike conventional exhibitions where people just stand and watch them,” he said.

This section clearly reflects the work of the Saint-Exupery Foundation to help children with visual impairments.

The third section of the exhibit also features various sculptures - this time in color.

The sculptures on display in the two sections arrived in Korea after a series of tours that stopped in Thailand and Singapore, among other places.

This exhibition has no age limit, meaning that it is not targeted at any specific group of people. Rather, just like “The Little Prince,” which holds the same significance for adults as well, it aims to touch all visitors in various ways.

Jeon Bo-sam, who is the director of the Gyeonggi Provincial Museum said, “Our museum hopes to get closer to audience with the exhibition as it marks its 20th anniversary this year.”

“I wouldn’t set any guidelines on how to enjoy this exhibition,” William Lee, the main organizer of the exhibition, said. “I just hope that people can feel it with their hearts, finding their own meanings in the exhibition.”

He says that visitors of all ages come and enjoy it. Parents with their children wander through the exhibit, while at times elderly visitors linger near the sculptures, seemingly lost in thought.

Just like the novel, which has different meanings for each reader, the exhibition aims to deliver the message that “The most beautiful things in the world cannot be seen or touched, they are felt with the heart,” as Saint-Exupery wrote.

For foreigners, docents are available at all time who can provide explanations in English and French.

Left: The exhibition on Jean-Jacques Sempe, a French cartoonist, opens with some 150 of his original drawings, Right: One of Sempe’s works, which was included in his book “Sempe a New York.” [KIM HYE-JUN, KT&G SANGSANGMADANG]

From a child’s perspective

“Sempe dreamed of becoming a musician in his childhood. Knowing this, it is very interesting to see how he described the musicians in many of his drawings.”

The docent explained to visitors Sempe’s artistic background while they nodded along. The French cartoonist had his own way of approaching the world with his soft touches of his pen, and at times, with watercolors. His warm-heartedness and pleasant humor are what fans love about his works.

An exhibition on Jean-Jacques Sempe is being held at KT&G Sangsangmadang gallery, located in Mapo District, central Seoul, until Aug. 3.

As can be seen from the title, “Jean-Jacques Sempe: from Paris to New York,” it follows the general flow of the artist’s life.

In the first section, titled “Sempe Goes to Paris,” drawings that demonstrate his thoughts on Paris are on display.

He was born in Bordeaux, France, in 1932. After growing up during wartime, the French cartoonist decided to leave for Paris and spent most of his life in the city.

Drawing was not enough to make his living from until his representative work for “Le Petit Nicholas” series gained international attention beginning in 1959. The book was written by Rene Goscinny, yet Sempe in part contributed in writing episodes that happen to the little schoolboy, Nicolas.

His later work, “Rien N’Est Simple,” which means nothing is simple, shows the difficulties he went through during his life.

Left: Slate boards, designed by Claude Garrande, are on display in the “2016 The Little Prince Exhibition.” In line with the Saint-Exupery Foundation’s efforts to support visually impaired children, the exhibition was specially designed to allow visitors to touch the exhibits, Right: Sculptures of various characters from the novel are also on display. [LE PETIT PRINCE EN COREE SECRETARIAT]

The second section, surprisingly, displays his works that criticized various social phenomena - for example, he criticized the fact that people are overly obsessed with television, in a humorous way.

The third section, which has the title of “Sempe and ‘The Little Nicolas’,” features his illustrations from the book, which naturally makes people smile.

Some of his drawings for Patrick Suskind’s novel “The Story of Mr. Sommer,” which are also familiar among his works, are being displayed in the exhibition as well.

As he is known for depicting the pure minds of children, the next section includes his drawings of children.

The last section includes his later works, which are more colorful than others.

He worked on designing covers for “The New Yorker,” a New York-based literary magazine, from 1978 to 2015, drawing more than 100 covers. He was the first French artist to design the covers for the magazine.

In the exhibition, some of the original magazine covers are on display. In all, some 150 original drawings by Sempe are included, some of which were displayed in a large-scale exhibition in Paris in 2011, according to the gallery.

The exhibition was organized as a part of a series to celebrate foreign artists that are less familiar to the Korean audience.