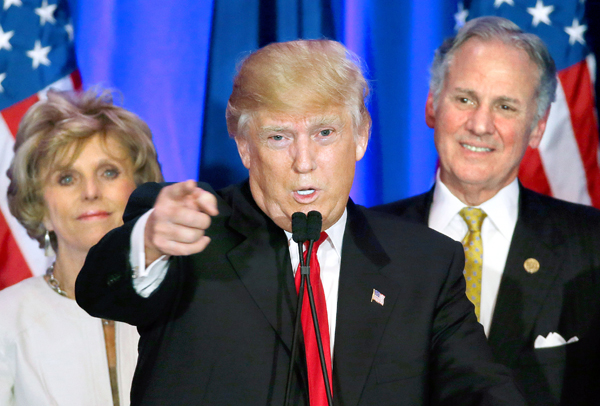 The neocons, who used to control the world by leading Washington’s hard-line foreign policy, are having an existential crisis over Donald Trump. They were criticized for putting the United States in a quagmire after pushing for the Iraq War during the George W. Bush administration. But their voices are still alive in think-tanks and political circles in Washington. However, as Trump’s popularity grows, the Council on Foreign Relations senior fellow Max Boot said he was having “sleepless nights” over Trump.

The group that most vehemently rejects Trump is not Hillary Clinton’s Democratic camp but the neocons in the Republican Party. They have formed an anti-Trump alliance want a third candidate or would rather vote for Clinton. William Kristol, founder and editor of The Weekly Standard, who is considered the “dean of American neoconservatism,” met with Mitt Romney and called for a third party candidate. When Chuck Hagel, who had opposed the Iraq War, was named a candidate for Secretary of Defense in 2012, Kristol led the campaign against his confirmation. Brookings Institution’s senior fellow Robert Kagan said, “The only choice will be to vote for Hillary Clinton. The party cannot be saved, but the country still can be.” Robert Kagan is a leading neoconservative, as is his father historian Donald Kagan. William Kristol’s father Irving Kristol is the “godfather of neoconservatism.” Former State Department adviser Eliot Cohen called Trump “the most dangerous demagogue in American politics in my lifetime.” He would “strongly prefer a third party candidate” but “probably if absolutely no alternative: Hillary.”

Neocons loathe Trump because he stands at the opposite end from neocon’s views, even more so than Clinton. Trump rejects America’s military intervention, which neocons believe in. Neocons would never accept Trump, who called the Iraq War “the worst decision ever made.” Trump feels especially favorable toward Russian President Vladimir Putin, whom neocons consider a villain. He thinks there are no reasons for the United States to prevent Russia’s intervention in Syria. On the pro-Israel policy, a sacrosanct value for the neocons, Trump said he would be a “neutral guy” in Israel-Palestinian negotiations.

However, as Trump gradually dominates the party, the neocons are being isolated. Senator John McCain, a hawk who had emotional ties with the neocons, announced his support for Trump, and Senator Lindsey Graham, also a hawk, called Trump “very cordial and funny” after a phone conversation, toning down his criticism. Last week, political daily Politico reported that the Never Trump campaign led by the neocons is turning into an isolated island. Neocons once stirred up the Korean Peninsula with the axis of evil argument. It is an irony of history that the biggest threat to neocons comes not from the Democratic Party but from the Republican presidential candidate.


*The author is a Washington correspondent of the JoongAng Ilbo.