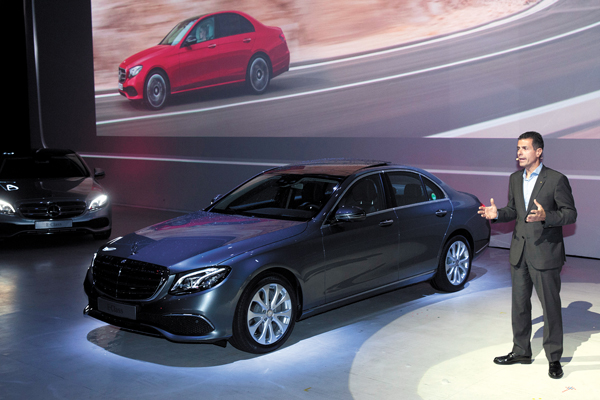 Mercedes-Benz Korea CEO Dimitris Psillakis presents the all-new E-Class sedan at a media preview event held at the Wangsan Sailing Marina in Incheon on Tuesday. He dubbed the car a “masterpiece of intelligence” emphasizing the automaker’s steps to develop a fully autonomous car. [MERCEDES-BENZ KOREA]

Mercedes-Benz revealed the latest version of its flagship E-Class sedan on Tuesday with what the company describes as the biggest overhaul in seven years, including an intelligent autonomous driving function.

The CEO of Mercedes-Benz Korea Dimitris Psillakis referred to it as a “big step towards fully autonomous cars” during a media preview of the sedan at the Wangsan Sailing Marina in Incheon on Tuesday.

The E-Class has been one of best-selling import sedans in the nation. Last year, 18,748 units were sold domestically, making Korea the third-largest buyer of the luxury sedan after the United States and China.

With the launch of the new sedan in the domestic market scheduled for June, the automaker aims to sell more than 20,000 of the new E-Class in 2017, which would mark a sales record for a single model.

The 10th-generation model comes with driving assistance systems such as Drive Pilot, which allows it to do things like automatically adjust its distance from other cars on the road, and Active Brake Assist, which automatically activates brakes when it senses a possible collision.

“The main differentiator of the new model is enhanced safety and comfort in driving,” said Psilakis. “But customers should note the functions are to assist their driving, not to drive for them, and it is a drivers’ responsibility to drive safely [even without any assistance functions].”

Other features include a 12.3 inch cockpit screen that can be manipulated through a touch control button on the steering wheel, and Multibeam headlights consisting of 84 light-emitting diodes with a high beam that won’t blind oncoming drivers.

The sticker price of the new E-Class ranges from 65.6 million won ($55,019) to 78 million with the individual consumption tax cut. The Driving Pilot option costs extra while Active Brake Assist is a basic function all the E-Class range.