Lee to be new ambassador to Japan

Lee to be new ambassador to Japan 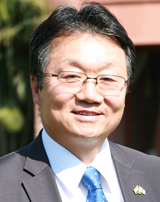 Career diplomat Lee Joon-gyu will soon be named to replace Yoo Heung-soo as the new top Korean envoy to Japan, according to sources on Tuesday.

Lee, 62, who spent 38 years as a diplomat and is an expert on the Asia and Pacific region, previously served as ambassador to India from 2012 until last October.

A native of Gongju, South Chungcheong, Lee received his postgraduate law degree from Seoul National University and joined the Ministry of Foreign Affairs and Trade in 1978.

Lee also formerly served as chancellor of the think tank Institute of Foreign Affairs and National Security (IFANS), ambassador for Overseas Koreans and Consular Affairs and ambassador to New Zealand. Lee has been posted in China, Malaysia and Japan.

In 1995, Lee served as a visiting researcher at the Keio University in Tokyo and is said to be fluent in Japanese.

Rather than being just a Japan specialist, however, Lee is considered to have gained well-rounded experience in economic, state and consular affairs. He is especially known within the Foreign Ministry for his refreshing “troubleshooting” style of diplomacy, which does not waver when confronted with problems.

The former ambassador, Yoo, 78, tendered his resignation in March after the conclusion of the breakthrough deal to resolve the issue of Japan’s wartime sexual slavery at the end of last year.

Yoo, a former lawmaker, has served as top envoy to Tokyo since July 2014, during a period of increased diplomatic tensions, especially over the issue of the Japanese military’s forceful recruitment of young women and girls into sexual slavery during World War II.

But last December, the Korean and Japanese foreign ministries’ sealed an agreement that includes an apology from the Japanese government and a pledge to set up a 1 billion yen ($9.16 million) fund backed by the state budget for former wartime sex slaves, euphemistically referred to as comfort women.

The two countries are in the process of nearing the establishment of a foundation for the comfort women victims, funded by the Japanese government in accordance with the deal.

Lee’s official appointment can take from a few weeks to up to 40 days in accordance with diplomatic procedure, pending an approval from the Japanese government.