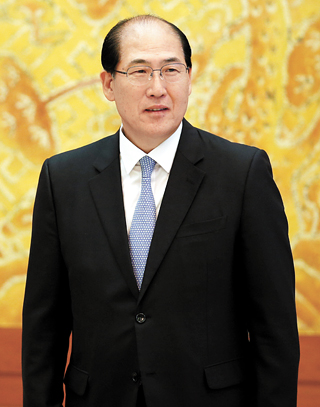 LEIPZIG, GERMANY Lim Kitack, secretary-general of the United Nations International Maritime Organization (IMO), said the current debt crisis in the Korean shipbuilding and shipping industries will serve as a “bitter medicine” for the struggling companies, and he believes in the Korean spirit that will allow them to overcome.

In an interview with the Korea JoongAng Daily at the International Transport Forum held May 18 ? 20 in Leipzig, Germany, Lim tried to be an even-keeled advisor for the shipbuilding and shipping industries of his mother country, giving them both warm encouragement and constructive criticism.

“The current crisis has been the result of partly the global downturn and also of fragile management of Korean shipping companiess,” Lim said.

He made the comment when the country’s largest shipping firm Hyundai Merchant Marine (HMM) began negotiations on charter fees with major global ship owners last week. HMM spends around 900 billion won ($760 million) a year on renting ships from those owners.

One of conditions required by its creditors in the current corporate restructuring process was to cut the rental fees by 30 percent.

The first round of the negotiations fell apart, and the company has until May 30 to make a deal happen. If it fails to cut the fees, the shipping companies can forced to file for court receivership, according to the Financial Services Commission.

“Korean shipping businesses and shipbuilders seem like they did not have an adequate mid and long term contingency plans,” he said. “They should have long-term strategies like their western competitors and be able to protect themselves from such cyclical changes in the market conditions in the long run.”

According to the maritime veteran, this is not the first crisis Korean shipping firms have faced. In the late 1970s and early 1980s, companies experienced similar difficulties.

“You never know how this industry will change,” Lim said. “The current crisis can be bitter medicine to the Korean shipping companies, but once they overcome it there will be no problem.”

As for the shipbuilding industry, Lim pointed out that Korean shipbuilders won orders for offshore facilities at prices that were too low, and that they also lack the sufficient ability to build high tech engineering facilities.

“But I am optimistic about recovery of the shipbuilders, considering what they have been doing,” he said. “As the Korean people made the shipbuilding industry the No.1 in the world with nothing, they can be the No.1 again in the offshore facilities after learning from this crisis.”

Lim was elected the eighth secretary general of the IMO in June 2015 and his election was endorsed in November. He is the second Korean to be the chief of a UN organization after UN Secretary-General Ban Ki-moon.

He was born in Masan, South Gyeongsang, one of major port cities in Korea, and majored in nautical science at the Korea Maritime and Ocean University in Busan, graduating in 1977.

It has been nearly five months since he was inaugurated as the so-called president of the maritime world.

As a specialized agency of the UN, the IMO is the global standard-setting authority for the safety, security and environmental performance of international shipping. Its main role is to create a regulatory framework for the shipping industry that is fair and effective, while also being universally adopted and implemented.

For the past months, Lim has made significant progress in winning agreement from IMO members on two significant issues.

About a month ago, the IMO members approved adoption of a data collection system on international ships, which will mandate shipping businesses to report fuel efficiency of their ships on annual basis to the IMO.

“There was strong resistance and intense debates were made,” Lim said. “But we finally agreed to approve the first mandatory system and we are going to endorse the agreement in October.”

Earlier this month, the IMO also approved the Global Based Standards for bulk carriers and tankers, which are enhanced guidelines for the safety of the vessels.

“The standards can be likened to structural guidelines for buildings,” he said. “Again, it took years to win approval so it is very meaningful. The new standards will renew safety standards for ships for the first time in the history of the shipbuilding industry.”