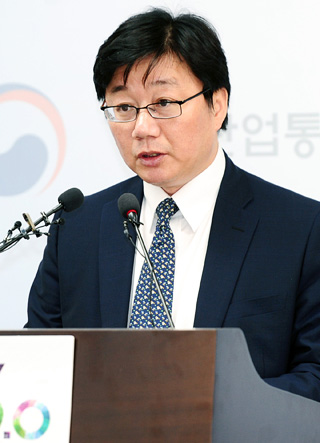 Chae Hee-bong, deputy minister of energy and resources policy at the Ministry of Trade, Industry and Energy announces the government’s plan to build a high-level radioactive waste facility within 36 years at a press briefing held at the Sejong Government Complex on Wednesday. [MINISTRY OF TRADE, INDUSTRY AND ENERGY]

The government announced plans to choose a site to store high-level radioactive wastes within 12 years and to construct a facility in 36 years.

There is already a facility for low-level wastes in Korea but this will be the first for high-level byproducts of nuclear power plants, according to the Ministry of Trade, Industry and Energy on Wednesday.

Since 1983, the government has been trying to find the place to store the wastes but failed nine consecutive times due to backlashes from residents of the chosen spots. The government said the country is running out of storage units.

“There are 36 nuclear power plants operating in Korea and each facility will run out of space to store waste as early as 2019,” said Chae Hee-bong, deputy minister of energy and resource policy at the trade ministry in a press briefing held at the Sejong Government Complex on Wednesday. “This time, we will let local governments and districts contact us rather than the government forcing them to follow our orders to construct a facility in their regions.”

Another official at the ministry emphasized that this plan is different from the past nine plans since nuclear plants are actually running out of storage and that local governments can decide whether they want the facility to be installed in their areas or not.

“It will take about 12 years to select the location and we will hear what they want to receive from the government and make deals during this period,” said Park Dong-il, a director of the nuclear power environment division at the ministry. He added that the government will decide what kind of benefits or incentives to give to areas that want to build storage facilities.

According to the ministry, it will take the government about eight years to select the site and get feedback from local residents. For another four years it will investigate whether it is safe to construct the facility in the region by look its geographical features.

“We plan to build an independent spent fuel storage installation, or interim storage of spent nuclear fuel, by 2035,” said Chae. “The permanent facility will start operating by 2053. If we are not able to build one in Korea, we are also thinking about negotiating with foreign countries to build the facility overseas.”

The ministry said Korea is in need of storage because it is not allowed to reprocess used nuclear fuel. Some European countries such as Finland that are similarly handicapped are creating waste facilities, according to the ministry.

Meanwhile, the Korean government opened its first low-and intermediate-level radioactive waste facility in Gyeongju, North Gyeongsang, last year. The government wanted to build a high-level facility there but couldn’t because of a backlash from residents.

“I do understand that people worry about what would happen if the facility runs into some type of problem,” said an official at the ministry. “Finland started to construct one last year and its government said it will have no problem for at least a million years, and we are trying to do the same.”

The project was expected to cost some 53 trillion won ($44.8 billion) in 2013 but a government official said it is now looking at an estimated cost of 63 trillion won.