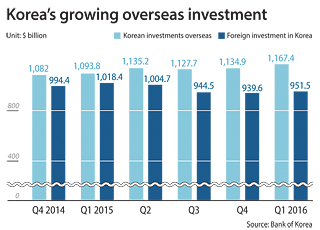 Korea’s net international investment position (NIIP) has exceeded $200 billion for the first time, according to data released Wednesday by the Bank of Korea.

The figure refers to the value of Korea’s investments overseas minus investments in Korea made by foreigners.

The increase is largely due to Korean companies boosting their overseas positions while cutting back on overall investment because of the struggling local economy.

“[Korea’s overseas investment] grew sharply largely because direct investments and purchasing of foreign equities have grown sharply,” said a BOK official “But also there were other factors that contributed such as the dollar appreciation against the major currencies that Korea has been investing in.”

In fact, direct investment when compared to the end of 2015 grew 3.41 percent to $287.9 billion, which is 8.35 percent larger than a year ago. Equity investment grew at a faster pace, expanding 5.5 percent as of March this year compared to the previous quarter to hit $248.9 billion. This figure is a 16.4 percent surge from a year ago.

The continuing growth in overseas investment comes at a time when overall investment in the first quarter retreated due to slow economic growth.

In the first quarter, Korea’s economy inched up only 0.4 percent compared to the previous quarter - the same quarterly growth seen in the second quarter of last year, when the Middle East respiratory syndrome outbreak brought the country to a standstill. In fact, Korean companies’ investment in expanding manufacturing plants and machinery in the first three months has shrunk 5.9 percent compared to the final three months of 2015.

Korean investors have also been drawn to overseas markets because they offer higher returns, which are particularly appealing as the Kospi’s daily trading has been stuck in a box step between 4 and 5 trillion won and interest rates have been held low due to the loose monetary policy.

The report also showed that Korea’s overseas debt situation has been improving.

The debt foreign investors owe Korea as of March amounted to $730.7 billion, which is $13.2 billion or 1.83 percent more than the previous quarter. This is a 7.31 percent increase compared to a year ago.

In contrast, the debt that Korea owes foreign investors has been shrinking. Debt owed to foreigners amounted to $385.8 billion, which is 2.42 percent or $9.6 billion less than at the end of last year and 7.7 percent less compared to a year ago.

Korea’s short-term debt has shrunk 4 percent compared to the end of last year, to $102.8 billion.