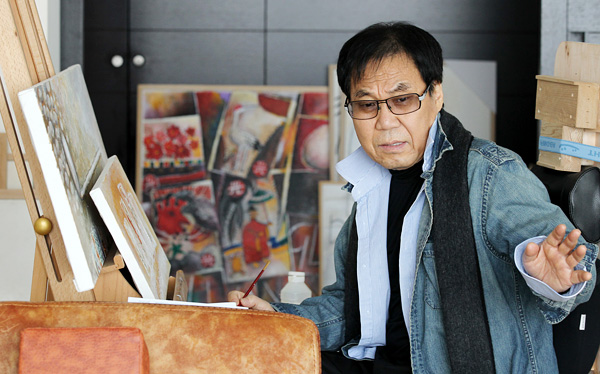 Cho Young-nam claims that he was wrongfully accused in the ghost painter controversy. “Did you really think I painted the whole thing? I thought you all knew. I have a very busy schedule. I wouldn’t be stuck in the studio all day long painting.”

Whether partially or entirely, he doesn’t seem to think that having another person paint for him was a problem. If he had thought it was wrong, he would have denied the allegation from the beginning.

Instead, he said it was a usual practice and argued that artists like Andy Warhol and Damien Hirst have also used assistants.

While the prosecutors are investigating him on fraud charges, the case is not an easy one. It is not just that Cho reimbursed some buyers in exchange for not cooperating with the investigation.

But also, who would come forward and say they purchased Cho’s paintings? It would be like admitting you have no eye for art and that you paid a large sum for the celebrity name value.

Song Ki-chang says he has painted more than 200 works for seven years for Cho, and even he has presented his own paintings to friends, telling them, “This is by Cho Young-nam and its value will go up in time.”

Whatever the truth may be, everyone knows that the price for Cho’s paintings, which go for as much as 10 million won ($8,452) or more, is not justified by artistic merit alone. The ghost painter controversy illustrates Korean society’s celebrity materialism, says Hanshin University professor Yoon Pyung-joon.

Fame is a prime value in the modern society, but Koreans follow celebrities excessively. There is no such thing as bad publicity, people think. University of Seoul professor Seo U-seok believes that in Korea, all other symbolic capital other than fame has fallen.

For example, a film with 10 million viewers is more mentioned and celebrated than an award-winning film. The prestige or authority of an award is not recognized, and people think only the number is a clear measure.

In this culture, people are not likely to look for unfamiliar, hidden gems. Stars get paid enormous sums, and celebrities are more sought after. When a celebrity cannot manage to be everything that the public wants, he or she poses as that ideal instead, paying others to do the actual work.

In justifying this customary practice, many artists have been secretly resorting to the use of ghost painters. Since many insiders already knew that the artist did not complete the work, Cho shamelessly argues that clients only needed his name when accused of not personally painting his works.

As long as people worship celebrities and consider fame to be the highest value, there will be a second and a third Cho Young-nam.


*The author is a deputy culture and sports news editor f the JoongAng Ilbo.