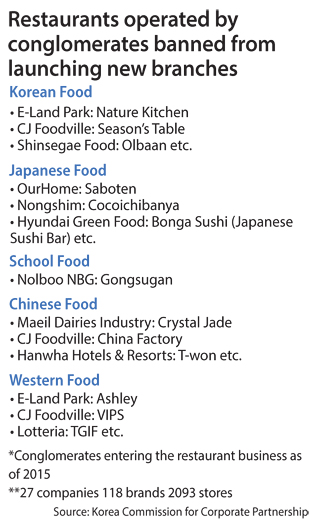 Conglomerates like CJ, E-Land and Shinsegae will be banned from opening new restaurant chains until 2019, said the Korea Commission for Corporate Partnership on Tuesday. The ban, which was supposed to end this year, was extended three years given the tough competition faced by small and large restaurants across the nation.

In 2013, the commission designated the seven categories as businesses fit for small and midsize enterprises (SMEs) at the request of the Korea Foodservice Industry Association, which represents local businesses. The commission also banned conglomerates from newly entering or expanding their businesses in the sector. With the renewed decision on Tuesday, the ban will be continued until May 2019.

Still, conglomerates are exempt from such bans when launching new stores near buildings affiliated with their own companies, shopping malls, within 100 meters (328 feet) of metropolitan railway station exits or within 200 meters of non-metropolitan station exits.

New town areas or newly developed market encompassing up to 3.3 million-square meters of land are also exempt from the ban.

“The policy is under a maximum six years sunset regulation, in two three-year terms,” said Yoon Hyung-soo, a director at the Korea Commission for Corporate Partnership. “This means the ban will automatically be terminated in 2019. The SMEs demanded we cut out exceptive clauses this time but we decided to keep it the existing way after some discussion.”

He added, “We also considered the difficulties of independent business operators entering nearby station areas or mega-shopping complexes, where it is costly to launch new stores.”

Conglomerates also agreed on the proposed terms by the commission, as most of them are preparing for a new launch in foreign markets due to the declining economic situation in Korea.

“There are roughly 400,000 stores registered for restaurant business in the country and designated restaurants subject to such bans account for only 1 percent of the total,” a spokesman from CJ Foodville said. “However, we agreed to the extended ban since domestic economies are weak and we understand mutual survival is important to small business operators.”

Yoon Kyung-hoon, E-Land Group executive, also said, “We agreed to the aims of the government and decided to cooperate rather than expand our presence in the domestic food industry.”

Yoon added that E-Land has instead been eyeing overseas markets. “We entered the Chinsese market last year and are currently preparing for new store launches in Hong Kong and Taiwan.”

Small business operators are welcoming the decision by the commission.

“I will exploit this opportunity as much as possible over the next three years and try my best to become a leading local business operator,” a 36-year-old sandwich store operator, Koh Jeong-won, said.