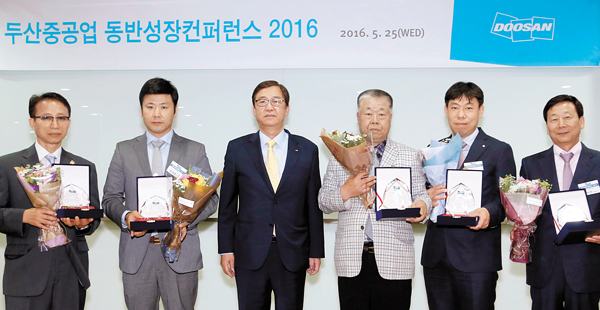 More than 170 of its partnering companies attended the conference which has been held annually since 2011. Diverse programs to boost the exports of partnering suppliers’ and to enhance the capabilities of each employee were offered at the conference.

Doosan introduced plans to aid partnering suppliers’ exports through a so-called “supporters for mutual survival” program which is led by the Korea Commission for Corporate Partnership and funded by the government and the company. It will also help partners find new export items and support their certification and patenting process in hand with Gyeongnam Center for Creative Economy & Innovation.

Doosan plans to provide 100 employees of its suppliers a training program dubbed STEPS (Strategic Thinking Enhancement Problem Solving), independently developed by the Doosan Group to train executives and employees of the group since 2011.

“We aim to strengthen partnership with our suppliers as growth of our suppliers ultimately lead to enhanced competitiveness of our company,” said Doosan Heavy Industries & Construction Vice Chairman Chung Ji-taik.