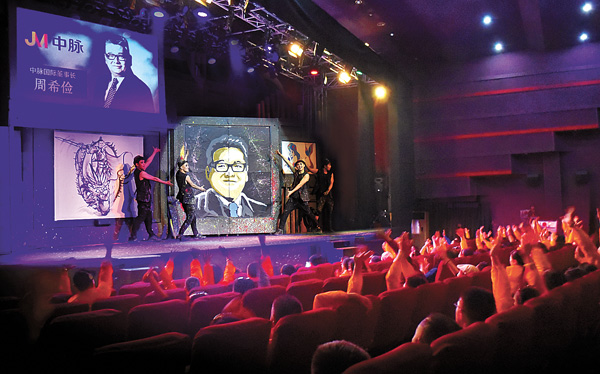 Employees of the Chinese company Zhongmai Group cheer as the actors reveal a painting of the head of the company during a performance of “The Painters: Hero.” In total 6,900 employees of the company saw the show during a visit to Korea earlier this month. The nonverbal performance is a newly created genre that involves actors recreating people’s faces on a large canvases. [PENTATONICS]

On May 12, a group of Chinese tourists filled a theater in Nakwon-dong, in central Seoul.

The tourists were the employees of Zhongmai Group who created a buzz while visiting Korea when 8,000 of them enjoyed samgyetang [Korean chicken soup] together beside the Han River earlier this month.

As a part of the tour, they headed to the theater to see “The Painters: Hero,” a nonverbal dance performance.

The audience exclaimed when the actors managed to quickly paint the face of the head of Zhongmai Group on stage. The actors went on to recreate the faces of famous characters from tales of China’s Three Kingdoms and brought some members of the audience on stage during the performance, which lasted for 80 minutes.

“It was magical,” said Yang Feng Ling, who watched the show.

In total, 6,900 visitors from the Chinese company saw the show, and a person related to Pentatonic, the company that runs the performance, said, “It reflects the fact that our performance has become a representative Korean cultural product.”

“The Painters: Hero” has been drawing larger foreign audiences since 2014, when roughly 680,000 people came to watch the show. “We are going to have a million views by foreigners this year,” said a person working for Pentatonics.

“The Painters: Hero” is a new type of art performance in which actors paint people’s faces on a large canvas. They use eight materials including acrylic paint and charcoal. The performance adds more elements for entertainment as actors throw in comedy and dance while they draw.

This genre of nonverbal performance first emerged when “Nanta” was born in 1997. It had been leading the trend for the past 20 years until “The Painters: Hero” took over the crown of getting most foreign viewers in 2014. The success lies in the fact that “Nanta” first developed a strategy to sell the performance to foreign tourists.

Around 2012, Chinese tourists began visiting Korea in large groups and the Korean tourism industry began to transform, focusing more on Chinese visitors rather than those from Japan and other Asian countries. “The Painters: Hero” got the glimpse of the changing trend and began holding shows up to five times a day as well as building more theaters. Currently, there are three theaters in Seoul for “The Painters: Hero” and one in Jeju. As a result, the show could host 10,000 attendees a day.

Four actors make up one performing team and there are eight teams in total. Out of the 32 actors, none have degrees in art because “acting ability is more important,” according to the “The Painters: Hero.” They go through six months of training at minimum before they appear on stage, the production said.

The normal ticket price for “The Painters: Hero” is between 40,000 won ($34) to 60,000 won. However, steep discounts are available to groups of foreign tourists.

Some people in the industry view this discount policy negatively. For example, a person from “Jump” said, “Tickets are being sold for under 10,000 won since ‘The Painters: Hero’ began to adopt an aggressive marketing strategy.”

This type of performance has become part of the trend of “dirt cheap tourism,” where domestic tourism companies stack up deficits. Therefore, they have to make up for it through commission fees by making tourists shop a lot, such as at the duty-free shops they contract with.

“People began selling performances [at lower prices] as duty-free shops became an important place that tourists visit,” said Choi Gwang-il, the president of the Korean Performing Arts & Tourism Association, which is an association for nonverbal performances that target tourists.

According to him, duty-free shops request the performance companies to lower the price, saying they will guarantee 300,000 attendees a year.

“Ticket prices are on the verge of becoming lower than 5,000 won,” Choi said.

Currently, “Nanta” and “The Painters: Hero” have contracts with duty-free shops.

Chae Hyung-gi, the vice president of Pentatonics, said, “Amusement parks cost less than 10,000 won. As long as it is part of the tourism industry, a drop in price is inevitable.”

Lee Hoon, a professor of tourism at Hanyang University, said, “Low-priced models in the performance industry are not sustainable. It should develop a higher-value-added business.”