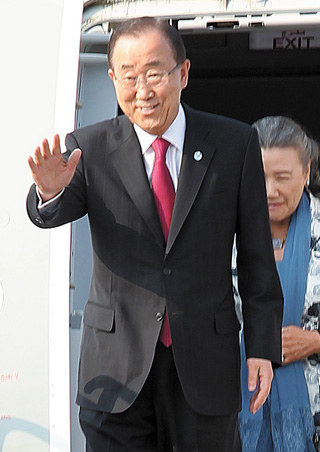 UN Secretary General Ban Ki-moon landed in Jeju Island Wednesday on a highly anticipated visit as his homeland ponders whether he will make a run for the presidency next year.

The 71-year-old UN chief arrived in Jeju Island Wednesday afternoon and attended a meeting with senior journalists arranged by the Kwanhun Club.

During this visit, the veteran diplomat will be afforded the prime-ministerial, or head-of-government, level of diplomatic protocol. In a 2008 visit, he received the highest protocol level reserved for heads of state. The Blue House security team will take charge of Ban’s security in Korea with bullet-proof vehicles shipped from Seoul.

Ban is scheduled Thursday to deliver a speech at the Jeju Forum for Peace and Prosperity following a meeting with Prime Minister Hwang Kyo-ahn. Then he will fly to Japan to attend a G-7 Summit meeting and return to Korea Friday. On Sunday, Ban will attend a Rotary International Convention in Goyang, Gyeonggi, then visit the Andong Hahoe Folk Village, a Unesco World Heritage site in North Gyeongsang.

He will take part in the 66th UN Department of Public Information/Non-Governmental Organizations Conference in Gyeongju on Monday, wrapping up his six-day Asian trip.

Ban’s visit, the first since last May, has generated plenty of media attention since he has emerged as a potential presidential candidate for the Saenuri Party, especially favored by figures loyal to incumbent President Park Geun-hye.

Hong Moon-jong, a key senior figure in the pro-Park faction, said in a radio interview last week, “Secretary General Ban is a constant, not a variable, for the Saenuri Party.”

Another ruling party official said that the fact that Ban is scheduled to spend two days in the Gyeongsang region despite a tight schedule demonstrates his intention to appeal to voters there, the traditional support base for the conservative Saenuri.

Political commentators say that if Ban decides to run next year, he will do so as standard-bearer of the conservative ruling party.

Ban, a native of North Chungcheong, joined Korea’s Foreign Ministry in 1970 and served as foreign minister from 2004 to 2006 under the Roh Moo-hyun government.

Ban took office as secretary general in January 2007 and his second five-year term as UN chief runs through December.

While it remains to be seen whether the former foreign minister will decide to enter the race, Seoul Mayor Park Won-soon, who is certain to declare a bid as a Minjoo Party candidate, indicated Ban should not run, citing UN resolutions on the secretary general adopted in 1946.

“If this country prides itself for having produced the head of UN, then it will only be appropriate to maintain the spirit stipulated in its resolution,” said the human rights lawyer-turned-mayor in a radio interview with YTN Wednesday.

UN resolutions on terms of appointment of the Secretary General stipulate that since its chief is “a confident of many governments, it is desirable that no Member should offer him, at any rate immediately on retirement, any governmental position in which his confidential information might be a source of embarrassment to other Members,” and goes on to state a secretary general “should refrain from accepting such position.”