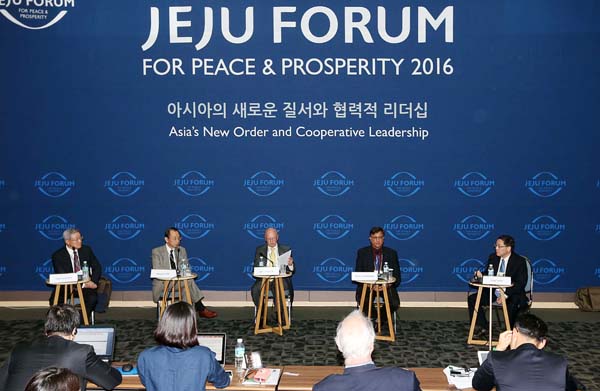 Panelists debate during Asia’s New Order and Cooperative Leadership, a session for the 11th Jeju Forum for Peace and Prosperity, which began at the International Convention Center Jeju in Seogwipo on Wednesday. [KIM SANG-GEUN]

SEOGWIPO, Jeju - The recent defeat of the Saenuri Party in the April 13 elections was a failure to address the concerns of the youth, Jeju Governor Won Hee-ryong said on the sidelines of a regional forum on Wednesday.

The current lack of job opportunities prevents young people from being able to buy homes, get married, raise children or enjoy their later retirement, Won said at a session of the 11th Jeju Forum for Peace and Prosperity, which began at the International Convention Center Jeju in Seogwipo.

The forum brought together more than 4,000 participants from about 60 countries.

Won, the chairman of the forum’s organizing committee, said the Saenuri Party’s stumble in the recent elections “is a reflection of the young people saying that the party’s direction was wrong.” He added that there is “uncertainty and a lack of hope” amongst the youth, “yet politicians are fighting each other instead.” He further said that they needed to “feel the pain of the youth, get wet with them and stand underneath the same umbrella.”

During the JoongAng Ilbo’s Media Talk Show 2016, he said, “When I was young, we had job opportunities we could select from; you could work 10 to 15 years and buy a house and raise children in that house.

In our 50s, we could marry off our children and enjoy an elderly life.”

The topic of the session was “Concerns and Outlooks of the Younger Generation” and also invited was popular musician and Jeju resident Lee Jung, who spoke and performed.

Won, a native of Jeju, shared his experience of being raised by a humble family on the island and moving on to become the top-scoring student in the College Scholastic Ability Test as well as the judiciary exam, becoming a prosecutor, then entering politics.

However he remained mum on whether he has future plans to run for president, saying, “Right now I need to focus on making things work in Jeju first.”

The Jeju Forum has, over the years, served as a platform for multilateral dialogue on how to promote sustainable peace and prosperity in the region. This year’s theme is “Asia’s New Order and Cooperative Leadership.”

The event also brings together hundreds of economic leaders, business executives and entrepreneurs including Jeffrey B. Straubel, co-founder and CTO of Tesla Motors, and Joe Kaeser, the president and CEO of Siemens AG.

The three-day forum is organized by the Jeju Peace Institute and hosted by the Jeju Special Self-Governing Province, International Peace Foundation, East Asia Foundation and the JoongAng Ilbo, with the support of the Ministry of Foreign Affairs.

This year’s forum hosts over 60 sessions and roundtables touching upon a range of issues including foreign affairs, security, economy, climate change and culture.

The Asia-Pacific Leadership Network for Nuclear Non-Proliferation and Disarmament, comprised of senior political, diplomatic and academic influencers from over 14 countries, issued a joint statement on Wednesday on the sidelines of the forum after holding its sixth meeting the previous day.

Murayama, the former Japanese prime minister, who is best known for his landmark July 1995 statement offering a “profound apology” for Japan’s colonial rule and wartime aggression, told reporters at the forum that he had regarded the recent breakthrough agreement between Seoul and Tokyo on the issue of wartime military sexual slavery.

He also recommended that Japanese Prime Minister Shinzo Abe “write a letter of apology to the comfort women victims” for the faithful implementation of the Dec. 28 bilateral agreement.