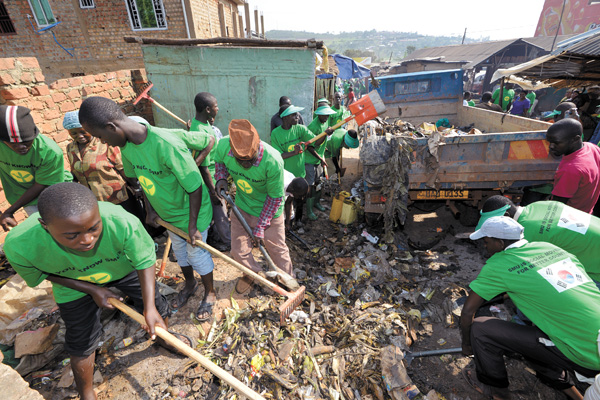 Villagers of Nsangi, Uganda, clean the streets in December 2014. About 300 villagers participated in the movement to improve their living conditions. [KOREA SAEMAUL UNDONG CENTER]

As China’s involvement in Africa garners ever more coverage, Africa’s other great Asian ally, South Korea, is stepping back up to the plate.

One of the key themes of President Park Geun-hye’s tour to Africa is promoting Korea’s role as an emerging development partner on the continent, assisting the countries’ economic and social advancement while creating more business opportunities for Korean companies. As a part of this effort, the Park administration will launch a new global cooperation program during her trip.

Park will travel to Ethiopia, Uganda and Kenya to promote Korea’s commitment to African economic growth. She will visit Ethiopia from May 25 to May 28, Uganda from May 28 to May 30 and Kenya from May 30 to June 1.

During her visit, the government will launch the “Korea Aid” project in the three countries on Park’s arrival, the Blue House said. A new form of official development assistance (ODA), the program will offer medical, food and cultural services. An Chong-bum, presidential senior secretary for policy coordination, said the program is intended to create a new model of cooperative understanding and stimulate a favorable business atmosphere in Africa with regard to Korean companies.

The Blue House said the project will combine development assistance with cultural diplomacy.

The three elements of the Korea Aid project - K-Medic, K-Culture and K-Meal - will enable Korean volunteers including doctors, cooks and technicians to travel in 10 vehicles to offer their services, according to the Ministry of Foreign Affairs. Three vehicles are allocated for K-Medic, four for K-Meal, one for K-Culture, and the others for administrative officials and media.

The K-Medic service, with a total of some 27 Korean doctors and nurses will especially focus on offering health services to children, girls and pregnant women mainly cover three areas: pediatrics, obstetrics and gynecology (ob/gyn) and internal medicine. They include 12 doctors and 15 nurses from Ewha Womans University Mokdong Hospital, Seoul National University Hospital and the National Medical Center, who will work local doctors and medic to provide check-ups, deliver health kits with basic medicines, as well as offer hygiene and first aid education and first aid.

This is in line with the Korean government’s push for the “Better Life for Girls” initiative which calls for the right for girls to an education, health and a profession.

The K-Food service will offer a taste of hansik (Korean food), as well as local food. It will provide meals in the form of dosirak (packed lunchboxes) including popular Korean dishes such as bibimbap (rice mixed with vegetables and oftentimes meat with hot spicy sauce). But the menu was decided taking into consideration feedback in Ethiopia, Uganda and Kenya and their tastes and preferences as well. This leg of the project focuses on the concept of forging friendship through sharing a meal.

The K-Culture truck would mainly provide screenings of educational clips as well as focus on introducing various aspects of Korean culture including K-pop.

The Korea Aid project also keeps with the larger objective of the United Nation’s Sustainable Development Goals (SDGs) adopted by world leaders in a summit last year to end poverty, fight inequality and injustice, and tackle climate change by 2030.

Because it is a mobile service, it is not limited by geographical constraints and brings services to where it is needed. As much as Korea Aid is in its first run, there are plans to expand the project in the future.

The Korea Aid project will first kick off on Saturday at Addis Ababa in Ethiopia and travel some 100 kilometers (62 miles) to the central city of Adama. Some 1,600 local people including college students are expected to participate during this stop which runs through May 31. The Uganda leg of the project will take place some 50 kilometers away from the capital Kampala between May 30 and 31. The Kenya leg will happen between June 1 and 2 near Nairobi near the Korea Project on International Agriculture (Kopia) office.

“Korea, like many other African countries, experienced hardships in the past,” Korean Foreign Minister Yun Byung-se said on May 13. “But it overcame them and rose to become a middle power in the international community. In this respect, Korea will be the best partner for Africa’s development. Two months ago, the Ministry of Foreign Affairs declared that this year will be the year of Africa. And President Park’s upcoming trip is expected to become a historic landmark to create Korea’s upgraded partnership with Africa.”

Yun made this remark at the 2016 Africa Day event, jointly hosted by the Foreign Ministry and the Federation of Korean Industries. Quoting an old African proverb, he added, “a friend is someone with whom you share your path.” The foreign minister also said that Korea sees Africa as a long-term economic partner.

Despite continuing global development assistance, many sub-Saharan African nations remain among the poorest in the world. Citing the most recent estimates, in 2012, the World Bank said 12.7 percent of the world’s population lived at or below $1.90 a day, a decrease from 37 percent in 1990 and 44 percent in 1981. And yet, progress has been uneven. Poverty in Sub-Saharan Africa stood at 42.6 percent in 2012, according to data from the World Bank.

Over the past few years, Korea has continued to invest in building a cooperative relationship with Africa. For instance, at the first Korea-Africa Forum in 2006, the government announced the Africa Development Initiative, intended to triple Korea’s ODA to Africa.

The Korea International Cooperation Agency (Koica), an implementing agency of grant aid under the Ministry of Foreign Affairs, said it is providing different assistance programs to each country in Africa to meet the particular needs of each recipient.

Public health, medical and agricultural programs are in particular being offered to sub-Saharan countries, it said. The agency operates offices at 16 countries in Africa and plans to expand its projects there.

Among the three countries that Park will visit, Ethiopia has a special relationship with Korea. The African country that fought on the side of South Korea and provided troops to the United Nations during the 1950-53 Korean War is today the largest African recipient of Korea’s ODA; Koica opened its first office in Africa in Ethiopia in 1995.

Uganda, Park’s second destination in Africa, was one of the eight countries that Korea selected as a key assistance recipient in Africa. Korea offered Uganda a total of over $68.8 million, of which $52 million was in grants, between 1987 and last year.

In 2015, it offered $23.1 million in ODA, up from $2.4 million in 2011. The funds were used for agricultural projects, vocational trainings, government competence improvement projects and Saemaul Undong, also known as the New Village Movement, which helps rural communities guide their own development.

During the same 28-year period, Korea offered Kenya a total of over $93.8 million in ODA, of which $44.4 million was in grants.

In 2011, the Korean government offered a total ODA of over $9.9 million to Kenya, which has dropped to $5.5 million last year.

Kenya also shares a special relationship with Korea. Korea tied a diplomatic knot with Kenya in 1964 under the presidency of Park Chung-hee, the late father of the current President Park.