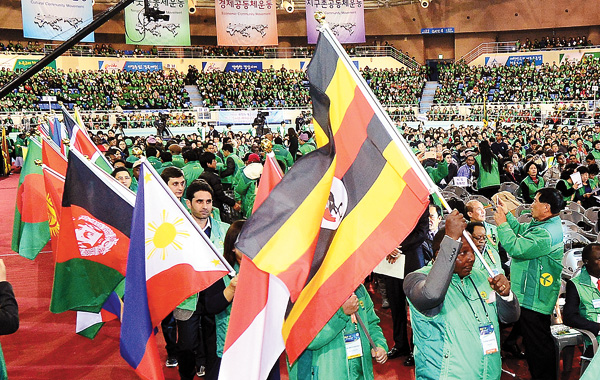 Flag bearers from 50 countries enter the Athletics Promotion Center in Daegu for the opening ceremony of the Global Saemaul Leadership Forum on Nov. 26, 2015. The event was attended by 6,000 participants including Saemaul Undong leaders from around Korea and world. [GONG JEONG-SIK]

President Park Geun-hye’s trip to Africa this week shed new light on Saemaul Undong, a development initiative launched by her late father nearly half a century ago, as developing economies enthusiastically pursue the campaign.

Park will start her trip on May 25 to visit Ethiopia, Uganda and Kenya. In addition to the government’s aid programs, Saemaul Undong, also known as the New Community Movement, is expected to serve as a powerful tool to deepen Korea’s cooperative relations with the region.

Launched in 1970 by then-President Park Chung Hee, the initiative was developed in order to modernize Korea’s rural economy. Despite its success, the movement lost momentum as the country rapidly industrialized. In recent years, however, the initiative discovered a new market, as it evolved into a global movement.

While the movement was adopted in all three African countries, Uganda has been particularly enthusiastic about the program, said Kim Kyou-hyun, senior presidential foreign affairs secretary. “President Yoweri Museveni is greatly interested in prompting Saemaul Undong in Uganda,” Kim said. “During Park’s visit, he will attend a Saemaul event with Park to express his strong intention to cooperate with Korea.”

Saemaul Undong’s global projects to fight poverty and promote diligence, self-reliance and cooperation within communities are currently ongoing at 120 villages in 24 countries around the world. About 5,300 foreigners were also invited to Korea from 93 countries to receive program orientation.

When the movement commemorated its 46th anniversary last month, Park discussed its future. “We should build it into a development cooperation model for the international community,” she said, adding that she attended the UN special conference on Saemaul Undong in September last year as it was selected as a new agricultural development paradigm by the Organization for Economic Cooperation and Development (OECD).

“Our experience has become a light of hope for many developing countries,” Park said. “Through the government network and field experiences of many Saemaul leaders, it can become a universal development strategy of developing economies.”

“Most of the problems that we face today are caused as our communities are collapsing,” said So Jin-kwang, president of Korea Saemaul Undong Center. “Therefore, Saemaul Undong is still an effective resolution for various economic, social, environmental and cultural challenges that we face.”

So said the center decided in 2013 to push forward the concept of “Global Saemaul Undong” in order to share Korea’s unique experience of growth and success with the international community. “Many international organizations, including the UN and developing countries, also made requests,” he said.

According to So, the movement first spread to Asian countries such as Indonesia and Thailand in the 1970s and 80s, and has further spread to Africa since then.

Park’s three African destinations have adopted the movement since 2009, and Uganda has made particularly impressive progress. “Public servants and village leaders were invited to Korea for education and they became capable of creating action plans on their own,” he said.

The movement in Uganda started with two pilot villages but quickly tripled. “And 40 more villages began the movement voluntarily, without outside help,” So said. “The country created its own center and localized the movement.”

Another expert, Choi Oe-chool, president of the Global Saemaul Undong Forum and professor of Saemaul Studies and International Development at Yeungnam University, also stressed that sharing Korea’s experience is the most pragmatic policy model for many developing countries.

“Korea is the only country that rose from a recipient of international aids to become a donor,” Choi said. “And when it was a recipient, Saemaul Undong played a key role in its ability to overcome poverty. It may be a policy and experience from the past but it’s a realistic policy model for developing countries’ dreams and hopes.”

“Ethiopia dispatched troops to the UN Forces during the Korean War, and 122 soldiers died to defend the freedom of a country with which it didn’t even have any diplomatic relations at the time,” Choi added.

Yeungnam University provides undergraduate and graduate programs on Saemaul Undong, and Ethiopians are the largest foreign student body in the program, he said. Of its 3,063 foreign students, 1,310 came from Ethiopia, 21 from Uganda and 11 from Kenya, he noted.

Both So and Choi stressed that Saemaul Undong is different from the usual government-led official development assistance (ODA) projects of other countries. “For ODA, donors often feel aid fatigue, while recipients can fall into aid traps,” So said. But Saemaul Undong is free from such feelings, because the participants achieve economic growth through self-reliance and cooperation.

“The key value of the movement is the awareness that ‘I will do it myself,’” Choi said, adding that providing education to the people of developing countries is the main goal.