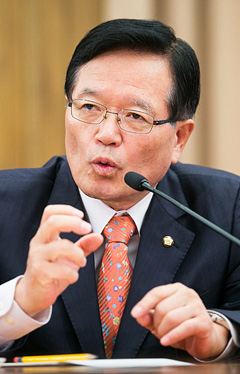 As speculation grows that the president will veto a plan that would enable the legislature to hold hearings whenever necessary throughout the year, two liberal parties vowed Wednesday to join forces against her.

When more than one-third of the lawmakers on a committee requests, or when the committee approves the need, a hearing can take place, the bill said.

The bill, known as the Chung Ui-hwa law, as it was sponsored by the National Assembly speaker, is intended to make it possible for a standing committee to call a hearing and key witnesses for questioning without having to go through the administrative hassle of launching an investigation.

President Park Geun-hye has not signed the bill and the Blue House expressed concern that it could “immobilize” the administration, leading analysts to speculate that Park may veto the bill.

Park has until June 7 to review the bill and make a decision. She left for trips to Africa and France on Wednesday and will return on June 5. A cabinet meeting to be chaired by the president is scheduled for June 7. The Ministry of Government Legislation began reviewing the bill to see if it includes any unconstitutional clauses.

If the ministry completes its review before the next cabinet meeting, to be chaired by Prime Minister Hwang Kyo-an on May 31, Park can still veto it from abroad. The Saenuri Party is also trying to find any unconstitutionality in the bill. Rep. Kim Do-eup, deputy floor leader, said Wednesday that the Constitution already granted the National Assembly the right to hold an audit and investigation of the government, and that this is more than enough to keep the balance.

The Minjoo Party of Korea and the People’s Party warned the president not to veto the bill. Floor leaders of the two parties, Minjoo Rep. Woo Sang-ho and People’s Rep. Park Jie-won, agreed Wednesday they will join forces if Park does indeed veto it. Overturning a presidential veto requires a vote by the National Assembly. More than half of the sitting members must attend and two-thirds must support the motion.

“If the 19th National Assembly fails to reapprove the vetoed bill during its term, the bill will lose its effect.”

Lawmakers from the other parties, however, claim that the bill can be reapproved in the 20th National Assembly.

Meanwhile, National Assembly Speaker Chung, who proposed the bill, held a press conference on Wednesday to mark the end of his term. In another push for the “365-day hearings,” Chung said the incoming lawmakers should end decades-old ineffective audits on the government in favor of the new system.

Allowing the National Assembly to audit affairs of state or investigate specific matters of state affairs was stipulated in the Constitution at its establishment in 1948.

While criticisms were high over the National Assembly’s poor and unproductive operation of the audits, all parties were wary of Chung’s proposal to end the system.