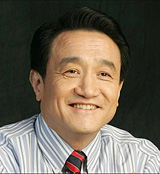 Cho Dong-sung, a professor at the Cheung Kong Graduate School of Business in Beijing, was elected president of Incheon National University on Wednesday.

Three candidates - Park In-ho, physics professor at Incheon National University’s department of natural science, Lee Ho-chul, politics and diplomacy professor at its department of social science, and Cho were nominated for the position. The university’s board of directors interviewed the candidates on Wednesday and Cho, who earned a majority of votes from the board, won the position. His term as the second president of Incheon National University, since the university became nationalized in 2013, will start from June 29, after the selection is approved by President Park Geun-hye.

Cho earned a bachelor’s degree in business from Seoul National University (SNU) and a master’s degree from Harvard Business School. From 1978 until February 2014, he worked as a professor at the business college in SNU. He also served as dean of the business college from 2001 to 2003. In June 2014 he joined the faculty at Cheung Kong Graduate School of Business.

Cho also has been working as a member of the board of directors for the International Vaccine Institute, a United Nations affiliated organization located in SNU, to advise on the procurement of research subsidies since 2002.