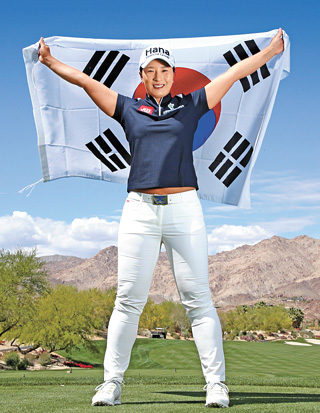 Pak Se-ri waves the Korean flag at a golf club in California. Pak will lead Korea’s golf team to the Olympics this summer, where the sport will be included for the first time in 112 years. Expectations are high for Korea’s golfers, and Pak says she feels the tension growing by the day. [HANA FINANCIAL GROUP]

National golf icon Pak Se-ri will lead Korea’s top players to the Olympics this summer as the skipper of the national team. And with Pak at the helm, Korea’s female golfers will be readier than ever to take on the rest of the world in Rio de Janeiro.

Pak was spotted at Travis Pointe Country Club in Ann Arbor, Michigan on May 25, getting ready for the inaugural Volvik Championship. There, she acknowledged how big the expectations of Korean fans are for the Olympics, where golf will be played for the first time in 112 years.

“Our country is so focused on Olympic competition,’’ Pak said during an interview with the Associated Press. “It doesn’t get any bigger for a Korean athlete than to compete for our country in the Olympics. There’s a lot of pressure on our young Koreans to make the team because we have so many great players over here.’’

Korea has five female golfers ranked in the top 10 in the world at the moment, making the country arguably the leader in women’s golf.

As the head coach of the team, Pak now shares the pressure felt by the nation’s golfers. “With the Olympics fast approaching, I can feel that burden more and more,” said Pak, sounding nervous. With a slew of talented Koreans competing for a spot in the summer games, all four Korean golfers - whoever they may be - are plausible contenders for a gold. At the very least, they are expected to add at least one medal for Korea.

Pak says the nature of the preparation process means the team doesn’t have the same kind of supportive dynamic teams in other sports might have. “There are only individual events in golf during Olympics and we are in the middle of the season so it’s not easy at the moment,” said Pak. “It’s a solo sport, so it’s not like golfers are obliged to work on their teamwork.”

Pak thinks the decisive factors will be individual talent and physical condition, and she wants her players to do everything they can to stay healthy. Pak herself had a tough year in 2015 due to a shoulder injury.

She cited Park In-bee as the player with the most to worry about.

“Park In-bee must be under a heavy psychological burden with all the injuries she has suffered,” Pak said. “I trust that she will manage herself well prior to the Olympics.”

Another element stressing out Pak is the outbreak of the mosquito-born Zika virus in Brazil. Five PGA golfers including Vijay Singh of Fiji have already said they will skip the Olympics, citing Zika. The virus is especially worrisome for female golfers since contracting it could cause problems in pregnancy, specifically their child being born with microcephaly, a medical condition that causes incomplete brain development.

“Zika is by no means a small concern among the players,” Pak said. “At the moment, however, there is nothing really we can do. We are just watching closely what’s going on in Brazil.

“However, we did hear that the weather will have gotten cooler by August and there will be fewer mosquitoes. I told the players to not be troubled by the virus right now and just focus on their playing.”

In the meantime, all top-ranking golfers including world No. 1 Lydia Ko, Park In-bee and third-ranked Lexi Thompson will compete in the inaugural Volvik Championship this weekend. This means the event could be a kind of prequel for the Olympics, showing how fierce the competition will be.

Pak has decided to play alongside her junior golfers. “I can see the young players with their heads high as they get ready for the tournament,” said Pak. “My tee shots have been somewhat unsteady this year. I decided to try a new driver for this weekend’s event.”

After returning to the field in March starting from the JTBC Founders Cup, Pak has made the cut only twice in six events. Her best record this season is 42nd place. As she plans to retire after this season, she hopes to wrap things up without any regrets. “Physically, I don’t feel too bad. I doubt I will ever get a chance to take a shot at a trophy again so each event is meaningful to me. I hope I get at least one win before I retire,” said Pak.